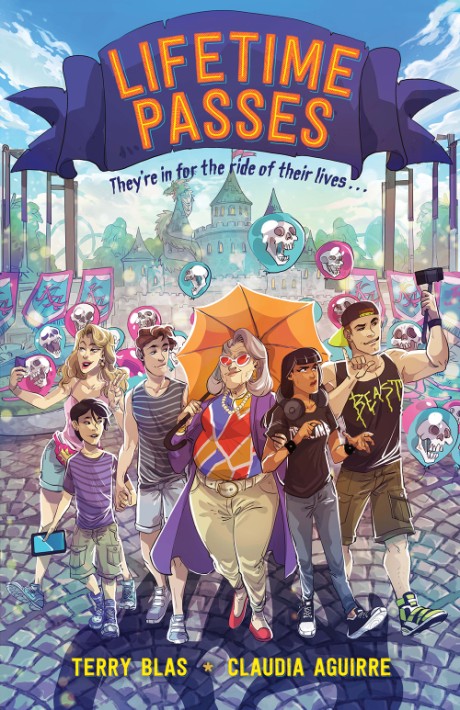 In this darkly comedic YA graphic novel, a group of teens starts a program to bring senior citizens to a local theme park to take advantage of the unofficial park policy: If someone dies on the property, the rest of their party is given lifetime passes!

Sixteen-year-old Jackie Chavez loves her local amusement park, Kingdom Adventure, maybe more than anything else in the world. The park is all she and her friends Nikki, Daniel, and Berke—although they aren’t always the greatest friends—talk about. Kingdom Adventure is where all Jackie’s best memories are, and it’s where she feels safe and happy. This carries even more weight now that Jackie’s parents have been deported and forced to go back to Mexico, leaving Jackie in the United States with her Tía Gina, who she works with at the Valley Care Living seniors’ home. When Gina tells Jackie that they can’t afford a season pass for next summer, Jackie is crushed. But on her next trip to Kingdom Adventure, she discovers a strictly protectedsecret: If a member of their party dies at the park, the rest of their group gets free lifetime passes.

Jackie and her friends hatch a plot to bring seniors from Valley Care Living to the park using a fake volunteer program, with the hopes that one of the residents will croak during their visit. The ruse quickly gets its first volunteer—a feisty resident named Phyllis.

What starts off as a macabre plan turns into a revelation for Jackie as Phyllis and the other seniors reveal their own complex histories and connections to Kingdom Adventure, as well as some tough-to-swallow truths about Jackie, her friends, and their future.

With artist Claudia Aguirre, Terry Blas has crafted a graphic novel that is dark and deeply moving. This book is Cocoon meets Heathers—a twisted satire about a magical land and the people who love it, even to the point of obsession. Jackie’s summer is about to turn into a wild ride filled with gallows humor, friendship, and fun—or is it?

Terry Blas talks about the inspiration for the book

Terry Blas is an illustrator and writer based in Portland, Oregon. His autobiographical comics, Ghetto Swirl, You Say Latino, and You Say LatinX, were featured on NPR, OPB, Vox, and Cosmo.com. Blas’s work has appeared in the comics Bravest Warriors, Regular Show, The Amazing World of Gumball, Adventure Time, and Steven Universe. His first graphic novel, Dead Weight: Murder at Camp Bloom, is a murder mystery set at a weight loss camp. Dead Weight was named by YALSA as a 2019 Quick Pick for Reluctant Young Adult Readers. His second graphic novel, Hotel Dare, is an all-ages fantasy epic inspired by his childhood memories of his grandmother in Mexico. It was selected as a YALSA 2020 Great Graphic Novel for Teens. Claudia Aguirre is a Mexican queer comic book artist and writer. She is a GLAAD Award nominee and Will Eisner Award nominee. Aguirre is the cofounder of Boudika Comics, where she self-publishes her own work alongside other creators. Her comics work includes Lost on Planet Earth with Comixology Originals, Hotel Dare with BOOM! Studios, Firebrand with Legendary Comics, Morning in America with OniPress, and Kim & Kim with Black Mask Studios. She lives in Monterrey, Mexico.