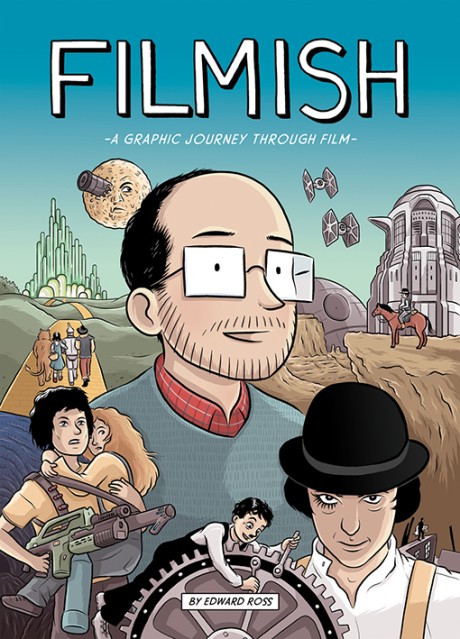 Filmish: A Graphic Journey Through Film

Cartoonist Edward Ross uses comics to illuminate the ideas behind our favorite movies. In Filmish, Ross’s cartoon alter ego guides readers through the annals of cinematic history, introducing some of the strange and fascinating concepts at work in the movies. Each chapter focuses on a particular theme—the body, architecture, language—and explores an eclectic mix of cinematic triumphs, from A Tripto the Moon to Top Gun. Like other bestselling nonfiction graphic novels such as Scott McCloud’s Understanding Comics, Filmish tackles serious issues—sexuality, race, censorship, propaganda—with authority and wit, throwing new light on some of the greatest films ever made.

“Highly recommended to anyone interested in cinema (and who isn’t?); it’s informed enough to be an introductory film studies textbook.”
Library Journal online (starred review) —

“It’s probably the first graphic novel in history to include the phrase, ‘As James Naremore posits . . . ‘ or, ‘As cultural theorist Slavoj Žižek puts it . . . ‘”
Flavorwire —

Edward Ross is a comic book artist, writer, and illustrator. Working alongside Dr. James Hall, he has created many science-themed comics for universities, museums, charities, and research bodies. Ross is a film studies graduate and regularly leads workshops in comic book creation. He lives in Edinburgh.