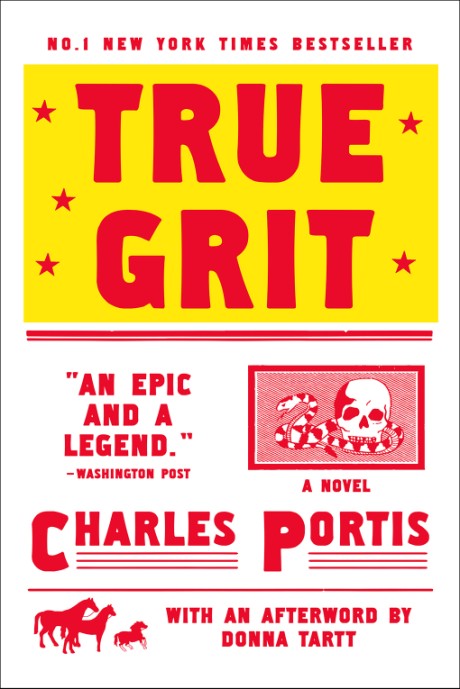 Charles Portis has long been acclaimed as one of America’s most enduring and incomparable literary voices, and his novels have left an indelible mark on the American canon. True Grit, his most famous novel, was first published in 1968, and has garnered critical acclaim as well as enthusiastic praise from countless passionate fans for more than fifty years.

This story of danger and adventure in the old west became the basis for two award-winning films, the first starring John Wayne, in his only Oscar-winning role, as Marshall Rooster Cogburn, and the widely praised remake by the Coen brothers, starring Jeff Bridges.

True Grit tells the story of Mattie Ross, who is just fourteen when the coward Tom Chaney shoots her father in Fort Smith, Arkansas, and robs him of his life, his horse, and $150 cash. Filled with an unwavering urge to avenge her father’s blood, Mattie finds and, after some tenacious finagling, enlists one-eyed Rooster Cogburn, the meanest available US Marshal, as her partner in pursuit, and they head off into Indian Territory after the killer.

True Grit is essential reading. Not just a classic Western, but an undeniable classic of American literature as eccentric, cool, funny, and unflinching as Mattie Ross herself. For fans of either the John Wayne classic or the more recent Coen brothers’ movie, it’s a chance to relive the story of Mattie and Rooster and experience their story as it was originally told. For fans of taut, funny storytelling, it will be a joy to experience in its original form.

This edition includes an afterword by bestselling author Donna Tartt (The Secret History and The Goldfinch) and a reading group guide.