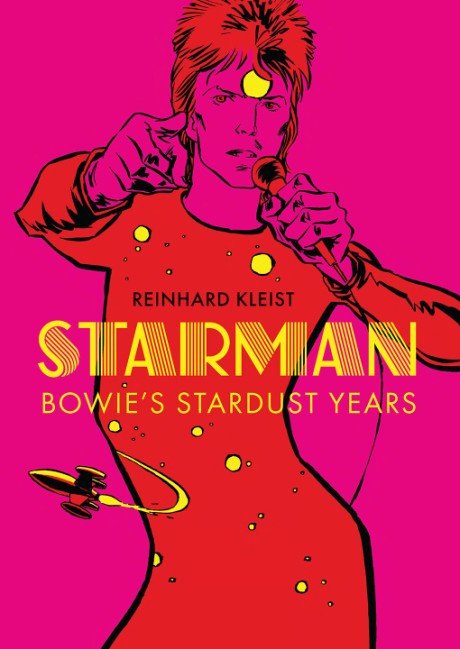 The genesis and nearapocalypse of a rock ’n’ roll messiah

In 1972, the rock ’n’ roll messiah Ziggy Stardust was born. His provocative play on sexual identity and gender roles laid the foundation for David Bowie’s ascent to legendary status as one of the most successful pop musicians of all time. Reinhard Kleist weaves the gripping tale of this dazzling character’s genesis, tracing both Bowie’s hapless efforts on the London music scene before Ziggy’s conception and his struggles with his own creation at the height of his fame. As Bowie transforms himself, ever more dizzyingly, into a self-portrait of an egocentric rock star, his extravagant lifestyle threatens to bring the real world collapsing around his ears.

This publication has not been prepared, approved, authorized or licensed by the David Bowie estate or any related entity.

Reinhard Kleist, born in 1970 in Hürth, Cologne, has worked and lived as an illustrator and comic book artist in Berlin since 1996. He made his international breakthrough in 2006 with the biographical comic book Johnny Cash: I See a Darkness, which was awarded the renowned Max and Moritz Prize and nominated for both the Eisner and Harvey Awards. With The Boxer in 2013, Kleist became the first cartoonist to receive the German Youth Literature Prize. In 2017, Kleist once again tackled one of music’s great storytellers in Nick Cave: Mercy on Me, which was simultaneously released in many languages. In 2018, Kleist was honored for his work with the Max and Moritz Prize for Best German Language Comic Book Artist. In 2021, Kleist tackled another extraordinary boxing champion, Emile Griffith, in the comic book Knock Out!