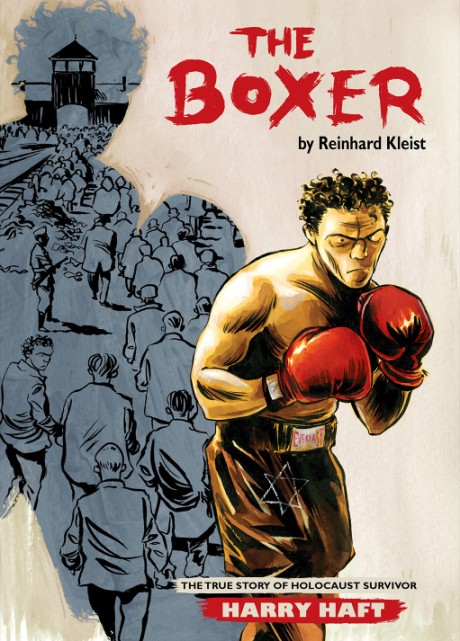 The Boxer and the Barry Levinson-directed movie The Survivor premiering on HBO on April 27, 2022, are both based on the book by Alan Scott Haft, the eldest son of Hertzko (Harry) Haft: Harry Haft: Auschwitz Survivor, Challenger of Rocky Marciano

Poland, 1941. Sixteen-year-old Harry Haft is sent to Auschwitz. When he is forced to fight against other inmates for the amusement of the SS officers, Haft shows extraordinary strength and courage, and a determination to survive. As the Soviet Army advances in April 1945, he makes a daring escape from the Nazis. After negotiating the turmoil of postwar Poland, Haft immigrates to the United States and establishes himself as a professional prizefighter, remaining undefeated until he faces heavy­weight champion Rocky Marciano in 1949. In The Boxer, Reinhard Kleist reveals another side to the steely Harry Haft: a man struggling to escape the memories of the fiancée he left behind in Poland. This is a powerful and moving graphic novel about love and the will to survive.

"The life of Holocaust survivor Harry Haft is a testament to the good will of the individual triumphing over the evil that man is capable of. Haft survived against all odds while facing extreme adversity, turning the horror of his circumstances into inspiration. Reinhard Kleist’s The Boxer is a story for all times and all peoples and for always."
John Leguizamo —

“Kleist’s narrative is set in a perfect visual landscape. It’s safe to say this is an early candidate for graphic novel of the year honors.”
Publishers Weekly —

“Kleist’s expressive, inky brushwork powerfully conveys Haft’s harrowing story. Although Haft might not be as famous as Kleist’s previous subjects, his tale of survival by any means is equally enthralling.”
Booklist —

“A fast-paced work of graphic nonfiction offers an important lesson from a dark corner of history.”
Shelf Awareness —

“The characters are drawn with the energetic nimbleness so admired in Will Eisner’s work. Sports fans and history readers, teen and up, will find this mesmerizing.”
Library Journal (Starred Review) —

"This new film from Barry Levinson deals with the concept of Holocaust survivor’s guilt from a distinct and complicated perspective . . . it’s powerful."
The New York Times —

Reinhard Kleist has written a number of critically acclaimed graphic novels, among them the award-winning biographies Havana: A Cuban Journey (2008), Johnny Cash: I See a Darkness (Abrams ComicArts, 2009), and Castro (2010). Kleist lives in Berlin, Germany.