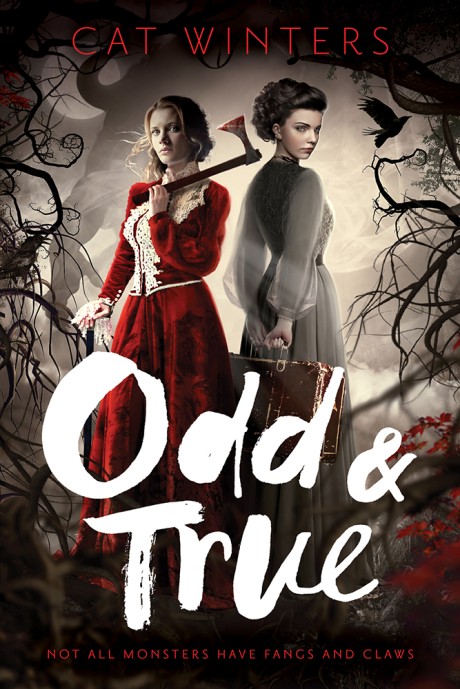 Trudchen grew up hearing Odette’s stories of their monster-slaying mother and a magician’s curse. But now that Tru’s older, she’s starting to wonder if her older sister’s tales were just comforting lies, especially because there’s nothing fantastic about her own life—permanently disabled and in constant pain from childhood polio.

In 1909, after a two-year absence, Od reappears with a suitcase supposedly full of weapons and a promise to rescue Tru from the monsters on their way to attack her. But it’s Od who seems haunted by something. And when the sisters’ search for their mother leads them to a face-off with the Leeds Devil, a nightmarish beast that’s wreaking havoc in the Mid-Atlantic states, Tru discovers the peculiar possibility that she and her sister—despite their dark pasts and ordinary appearances—might, indeed, have magic after all.

**STARRED REVIEW**
"The story is adventurous and fast paced, and Winters' atmospheric writing and exploration of themes such as storytelling, family, disability, and trauma will entice many teens...An excellent purchase for creepy historical fiction shelves."
— School Library Journal

"Winters...is a master at weaving historical events into dramatic narratives touched by the supernatural; careful attention is paid to the very real panic around the 1909 sightings of the Devil."
— Bulletin of the Center for Children's Books

"Winters has woven an intricate and innovative pattern of structure, genre, and history that cannot fail to capture readers' imaginations."
— Kirkus

"There is just enough mysticism and fantasy to entice readers, making them eager to spend more time with the sisters."
— International Literacy Association

"Like a turn-of-the-twentieth-century, gender-swapped spin on television's Supernatural, this is engrossing paranormal horror with two strong, smart female leads."
— The Horn Book Guide

Cat Winters is the author of the critically acclaimed young adult novels The Steep and Thorny Way, The Cure for Dreaming, and In the Shadow of Blackbirds, the latter of which collected three starred reviews and was a William C. Morris Award YA Debut Award finalist. She lives in Portland, Oregon. Visit the author at catwinters.com.