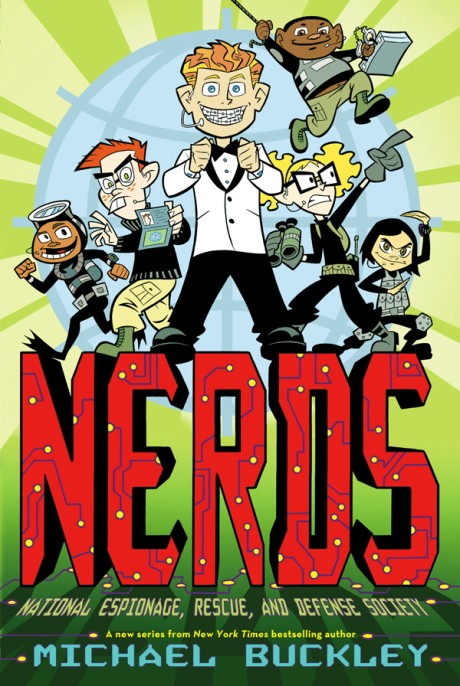 Meet the NERDS, a team of eleven-year-old super spies:

Duncan “Gluestick” Dewey: He’s a paste-eater who can stick to walls.
Ruby “Pufferfish” Peet: Her allergies help her detect danger and dishonesty.
Heathcliff “Choppers” Hodges: He controls minds with his buckteeth.
Julio “Flinch” Escala: His hyperactivity gives him super speed and strength.
Matilda “Wheezer” Choi: Her inhalers enable her to fly and blast enemies.
Jackson “Braceface” Jones, the new recruit. This metal mouth is the team’s go-to gadget guy . . . if only he can get over becoming a NERD.

Can this team of misfits save the world from their secret headquarters in the basement of their school? Can you read NERDS without laughing? Go ahead and try!

Michael Buckley is the author of the New York Times bestselling series and Today Show Al Roker Book Club pick The Sisters Grimm. He has also written and developed shows for Nickelodeon, Disney, MTV Animation, the Sci- Fi Channel, the Discovery Channel, and VH1. He lives in Brooklyn with his wife, Alison, and son, Finn.