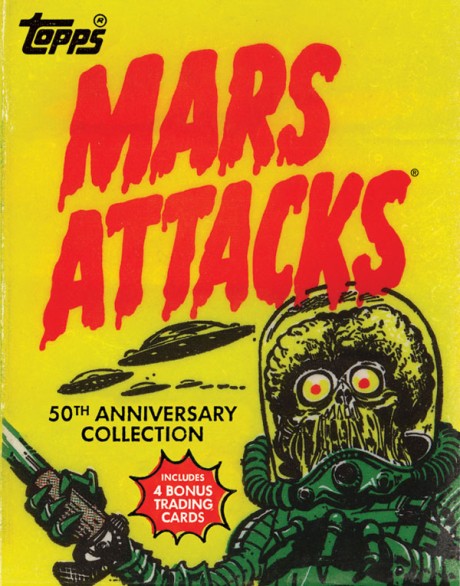 In celebration of the 50th anniversary of Mars Attacks, this comprehensive book is the first-ever compilation of the infamous science-fiction trading card series produced by Topps in 1962. Edgy, subversive, and darkly comedic, this over-the-top series depicting a Martian invasion of Earth has a loyal following and continues to win new generations of fans. For the first time, this book brings together high-quality reproductions of the entire original series, as well as the hard-to-find sequel from 1994, rare and never-before-seen sketches, concept art, and test market materials. Also included are an introduction by series co-creator Len Brown and an afterword by Zina Saunders, daughter of the original artist, providing an insider’s behind-the-scenes view of the bizarre and compelling world of Mars Attacks.

Includes preliminary sketches and artwork, including a facsimile of the original trading card mechanical on the inside back cover, with reproduction of the 1962 handwriting from the original Topps production department.

“The best thing about this 50th-anniversary book is that it frees Mars Attacks from rose-tinted memory.” —NPR.org

“The work produced by writer Len Brown and artist Norm Saunders, collected now in the anthology Mars Attacks: 50th Anniversary Collection . . . continues to pass muster as a lurid snapshot of sci-fi paranoia at its most pulp-fictiony.” —Wired.com

“It’s like a mini-museum of alien grotesquerie between two solid covers, depicting all the iterations of the series, with further treatments by modern illustrators, and sketchbook reproductions, and names, dates, and times. Oh, and? And there are four bonus trading cards included with each copy of this graphic and texty artifact.” —AustinChronicle.com

“It’s a true gem of American pop culture history that should be a centerpiece on any true geek’s coffee table.” —The Houston Press Art Attack blog

The Topps Company, Inc., founded in 1938, is the preeminent creator and brand marketer of sports cards, entertainment products, and distinctive confectionery. Len Brown, former creative director at Topps—where he worked for over 40 years—is the co-creator of Mars Attacks. He lives in Texas. Zina Saunders is an author, illustrator, and animator. She lives in New York.