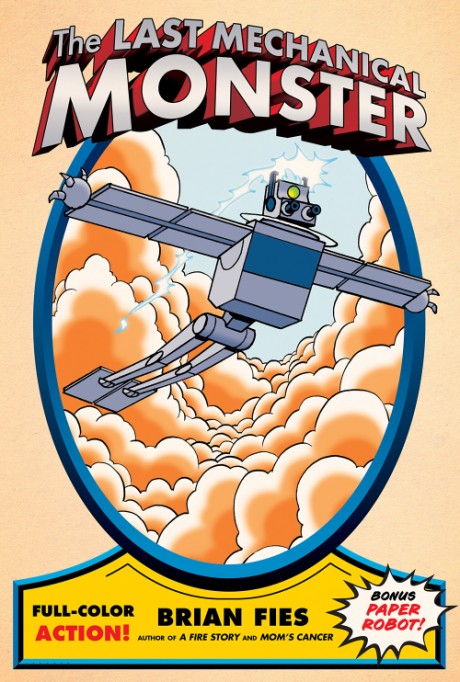 From Brian Fies, the acclaimed graphic novelist of Mom’s Cancer, Whatever Happened to the World of Tomorrow?, and A Fire Story, comes a classic comic book adventure for all ages

Decades after being imprisoned for threatening his city with an army of giant robots, an elderly scientist reenters society, only to discover he needs help navigating life in the 21st century. Experiencing real kindness and friendship for the first time, his new relationships challenge the inventor’s single-minded devotion for vengeance—just as his plans threaten to spiral out of his control. The Last Mechanical Monster by Brian Fies is a story about ambition, creativity, mortality, friendship, and legacy. But it is also a story about how we want to be remembered, and what we leave behind.

This latest graphic novel from Brian Fies (Mom’s Cancer, Whatever Happened to the World of Tomorrow?, and A Fire Story) already has a fan base and a considerable history of accomplishment. Initially published online as a webcomic, it was nominated for an Eisner Award for Best Digital Comic in both 2014 and 2015. It is also a pivot from Fies’s more serious graphic novels, created at a time when he was between large, demanding projects, and needing to remind himself that comics could and should be fun and provide a joyful escape—something we can all use a little more of these days.

“Brian Fies’s The Last Mechanical Monster tells the story of a long-forgotten super villain who attempts one last attack on humankind. Through Fies’s masterful cartooning and heartfelt text, the embittered scientist gradually discovers forces much more powerful than his weapons and robots—community, compassion, and forgiveness. A wonderful story of heroes, villains, and the lonely souls caught somewhere in-between.”
Paul Dini, writer/producer, Batman: The Animated Series —

“One of my wife Judy’s favorite mottos is ‘Great art has a sense of inevitability.’ Brian Fies’s The Last Mechanical Monster feels inevitable, natural—like it’s always existed. You don’t need to have seen the classic cartoon on which it is based to appreciate this tender-hearted requiem for a forgotten mad scientist. If you like sentimental, character-driven award bait—and especially if you don’t—you’ll be hard-pressed not to adore this charming graphic novel.”
Jon Bogdanove, legendary Superman comic book artist —

“With this book, Brian Fies has created a beautifully crafted, loving tribute to one of the greatest animated short films of all time.”
Chip Kidd —

“What a great idea! Brian picks up the baton left by the Fleischer Studios’ cartoon from 1941 and finishes out the story. And what a treat! The Fleischer Superman cartoons are what got me interested in considering animation as a career, and The Last Mechanical Monster does sweet justice to the series!”
J.J. Sedelmaier, animation director/producer, SNL’s Saturday TV Funhouse, MTV’s Beavis and Butt-Head —

“The rollicking tale of a mad genius intent on revenge, a giant robot restored from oblivion, and the imperturbable kindness of strangers. A rip-roaring, heart-warming story of destruction, connection, and transformation—sort of. I laughed. I cried. I loved every astounding page!”
Louise Simonson, author of Superman: The Man of Steel and Superman: Doomsday & Beyond —

“With The Last Mechanical Monster, Brian Fies has woven a masterful tale of villainy and everyday heroes. It’s a story about rage, but it’s also—ultimately—a story about redemption. And, I’m not ashamed to say, the ending left me misty-eyed.”

"Fies’s animation-style artwork recalls C.C. Beck and Scott McCloud, and of course the film The Iron Giant with its clean sharp lines highlighted by the bright colors of a Golden Age comic book... This one’s an absolute wonder."
Publishers Weekly, STARRED Review —

Brian Fies is a writer and cartoonist. His widely acclaimed first graphic novel, Mom’s Cancer, won the Eisner Award for Best Digital Comic in 2005 (the first webcomic to win this award and the inspiration for the category), the 2007 Lulu Blooker Prize for Best Comic, the 2007 Harvey Award for Best New Talent, and the 2007 German Children's Literature Award. He is also the author of the acclaimed, award-winning graphic novels A Fire Story, which received four starred reviews and a regional Emmy Award for an animated adaptation, and Whatever Happened to the World of Tomorrow?, winner of the American Astronautical Society’s 2009 Eugene M. Emme Award for Best Young Adult Literature. He lives in Santa Rosa, California.