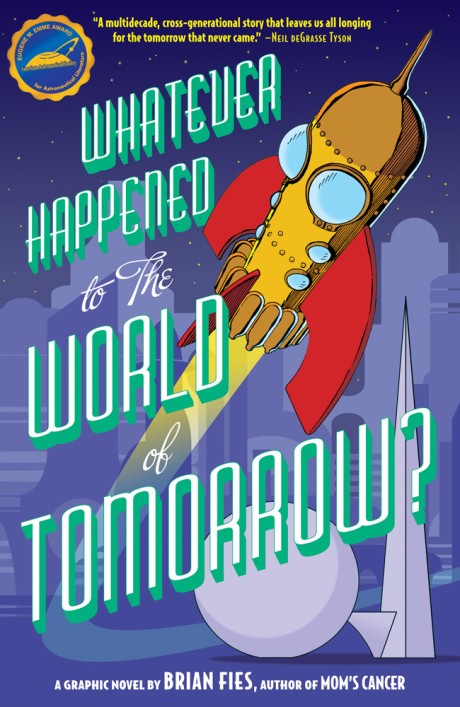 Whatever Happened to the World of Tomorrow?

Whatever Happened to the World of Tomorrow?, the long-awaited follow-up to Mom's Cancer, is a unique graphic novel that tells the story of a young boy and his relationship with his father.

Spanning the period from the 1939 New York World's Fair to the last Apollo space mission in 1975, it is told through the eyes of a boy as he grows up in an era that was optimistic and ambitious, fueled by industry, engines, electricity, rockets, and the atom bomb. An insightful look at relationships and the promise of the future, award-winning author Brian Fies presents his story in a way that only comics and graphic novels can.

Interspersed with the comic book adventures of Commander Cap Crater (created by Fies to mirror the styles of the comics and the time periods he is depicting), and mixing art and historical photographs, this groundbreaking graphic novel is a lively trip through a half century of technological evolution. It is also a perceptive look at the changing moods of our nation-and the enduring promise of the future.

Praise for Whatever Happened to the World of Tomorrow?

"A graphic novel that looks like TV's "Futurama" bred with The Golden Age of Comic Books, Whatever Happened to the World of Tomorrow? is at times charming, at times sad and foreboding, and always thought provoking." —Air & Space Smithsonian

"An exceptional and highly engaging experience." —The Miami Herald

"Whatever Happened To The World Of Tomorrow is a very special book that will speak to you on so many levels. And at the end of it, when you sit there and think on what you've just read, it may even make you, like it did me, realise that Fies' vision of our past and his hope for the future is something we can all share in. Quite brilliant."—Richard Bruton, forbiddenplanet.co.uk

Brian Fies is a science writer, illustrator, and cartoonist whose widely acclaimed first graphic novel, Mom's Cancer, won the 2005 Eisner Award for Best Digital Comic (the first web comic to win the award and inaugurate this new category), the Lulu Blooker Prize for Best Comic, the Harvey Award for Best New Talent, and the German Youth Literature Prize, among other awards and recognition. He lives in northern California.