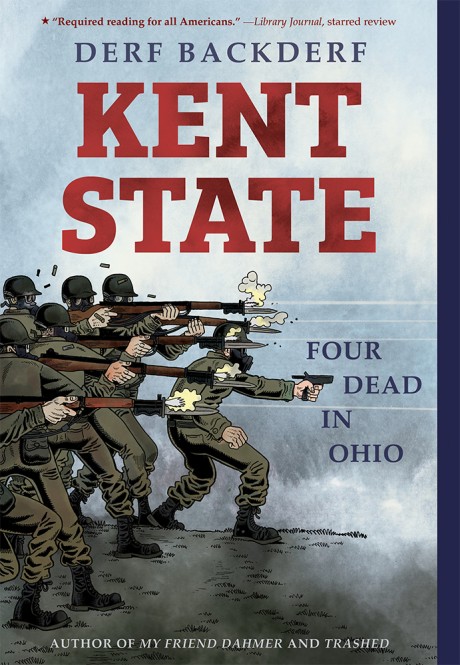 From Derf Backderf, the bestselling author of My Friend Dahmer and Trashed, comes the tragic and unforgettable story of Kent State—winner of the Eisner Award for Best Reality-Based Book—now in paperback

On May 4, 1970, the Ohio National Guard gunned down unarmed college students protesting the Vietnam War at Kent State University. In a deadly barrage of 67 shots, 4 students were killed and 9 shot and wounded. It was the day America turned guns on its own children—a shocking event burned into our national memory. A few days prior, 10-year-old Derf Backderf saw those same guardsmen patrolling his nearby hometown, sent in by the governor to crush a trucker strike. Using the journalism skills he employed on My Friend Dahmer and Trashed, Backderf conducted extensive interviews and research to explore the lives of these four young people and the events of those four days in May, when the country seemed on the brink of tearing apart. Kent State: Four Dead in Ohio was initially published in hardcover in time for the 50th anniversary of the massacre. As the events of the final days of the Trump administration unfolded, it became clear that this moving and troubling story about the bitter price of dissent was as relevant to our times as it was in 1970.

Derf Backderf is the bestselling and award-winning author of My Friend Dahmer, Trashed, Punk Rock and Trailer Parks, and Kent State. He lives in Cleveland, Ohio.