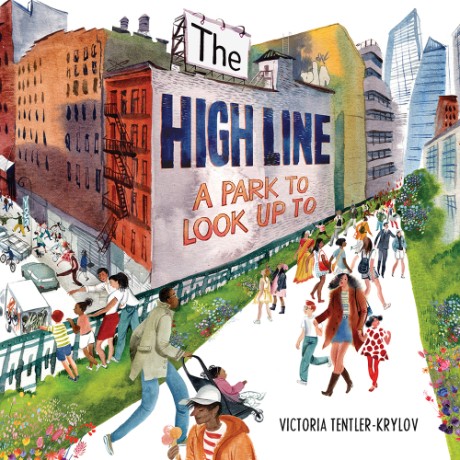 A Park to Look Up To

An illustrated history of New York City’s internationally famous High Line, one of the world’s most innovative and inspiring public parks

Imagine a very different New York City—one whose streets are filled with horses and buggies and people on foot. Now imagine the block-long freight trains that shared the same roads delivering goods to the westside factories. How did New York solve the problem of trains barreling through busy city streets? They built a train track above all the hustle and bustle, and the High Line was born.

Once trains were no longer needed to transport goods, the High Line sat abandoned, ready for demolition. But the City had other ideas. The High Line opened as a 1.45-mile-long park in 2009. It quickly became an iconic, must-see attraction and a marvel of landscape architecture, admired worldwide for its history, beauty, and creative union of urban design with greenspace. As the High Line became a global inspiration, longtime residents of the neighborhood surrounding it also advocated to keep the park feeling like home.

Packed with facts and gorgeously illustrated, The High Line: A Park to Look Up To is the story of an innovative idea and the people who made it possible—from the ingenuity of those who first built it for the needs of industry, to those who reimagined it as a community space for art, recreation, and the preservation of nature.

“Documents a real triumph of urban renewal and innovative land use. In the bright, stylish watercolors, diverse crowds of figures work and socialize both on bustling city streets and, later, on swooping pathways amid abundant carpets of well-kept wildflowers and grassy swards. A vibrant, if somewhat formalized, tribute.”
Kirkus Reviews —

Victoria Tentler-Krylov is a trained and practicing architect, as well as a children’s and editorial illustrator, who grew up in Saint Petersburg, Russia, and studied architecture and urban design at Cooper Union and Columbia University. Her inspiration is fueled by urban landscapes but also by fantasy, possibility, and imagination. Her other passion is experimenting with digital and traditional art tools, and in particular, pushing the boundaries of watercolor digitally. Building Zaha: The Story of Architect Zaha Hadid was her author-illustrated debut, and her illustrated picture books include We Are a Garden, The Cyclops of Central Park, Just Read!, and Peter Pan: A Modern Retelling. She lives with her family just outside Boston, Massachusetts.