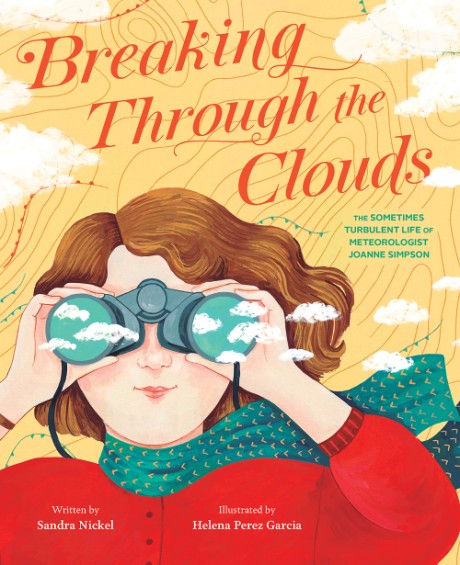 Breaking Through the Clouds

When Joanne Simpson (1923-2010) was a girl, she sailed her boat beneath the puffy white clouds of Cape Cod. As a pilot, she flew her plane so high, its wings almost touched them. And when World War II began and Joanne moved to the University of Chicago, a professor asked her to teach Air Force officers about those very clouds and the weather-changing winds.
As soon as the war ended, Joanne decided to seriously study the clouds she had grown to love so much. Her professors laughed. They told her to go home. They told her she was no longer needed. They told her, "No woman ever got a doctorate in meteorology. And no woman ever will."

But Joanne was stubborn. She sold her boat. She flew her last flight. She saved her money so that she could study clouds. She worked so hard and discovered so much that—despite what the professors said—she received a doctorate in meteorology. She was the first woman in the world to do so.

Breaking Through the Clouds tells the story of a trailblazing scientist whose discoveries about clouds and how they work changed everything we know about weather today.

"An energetic, compassionate examination of a determined researcher who left her mark on the field of atmospheric sciences."
Publishers Weekly —

"Pérez Garcia, a Spanish artist who uses color beautifully, illustrates the story with gouache paintings that place Simpson within orderly twentieth-century surroundings, while occasionally integrating imaginative elements that help viewers visualize her inspirations, her emotions, and her insightful work."
Booklist —

BREAKING THROUGH THE CLOUDS Curriculum Guide

BREAKING THROUGH THE CLOUDS Curriculum Guide by Abrams Books on Scribd

Sandra Nickel is a former New York City lawyer who now lives with her family in Switzerland. She is a graduate of the Vermont College of Fine Arts with a master of fine arts in writing for children and young adults. Helena Perez Garcia is a Spanish illustrator whose work has appeared in magazines, newspapers, and books around the world. Her clients include Penguin Random House, The Body Shop, Tate Publishing, and Reader’s Digest, among many others. She currently lives and works in Madrid.