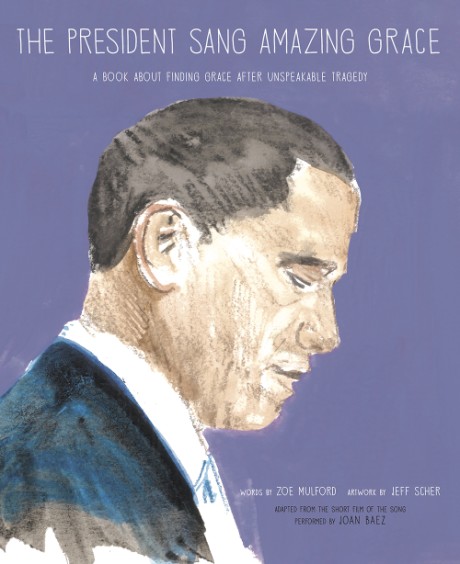 Lyrical account of the day President Obama sang with a grieving nation following the 2015 shooting in a black church in Charleston, South Carolina

When nine people were killed in a historic black church in Charleston, South Carolina, in 2015, the nation grieved as one, and when President Barack Obama sang “Amazing Grace” during his eulogy for Reverend Clementa Pinckney, it was acknowledged as one of the most powerful moments of his presidency. Singer/songwriter Zoe Mulford was so moved that she wrote the song “The President Sang Amazing Grace,” which was then illustrated by filmmaker and painter Jeff Scher for a video that has been viewed countless times. This book presents the lyrics to the song, Scher’s paintings, excerpts from Obama’s eulogy, biographies of those who were killed, historical context, and sheet music.

"Following the 2015 shooting that killed nine African-American people at a Charleston, S.C. prayer service, President Obama read a eulogy before leading those gathered in song. When Mulford, a singer-songwriter, heard the president sing “Amazing Grace,” she wrote a song about the shooting and aftermath that was recorded by folk artist Joan Baez and animated by Jeff Scher. Adapted into a picture book, Mulford’s sensitive lyrics (“But no words could say/ what must be said/ for all the living/ and the dead”) accompany Scher’s wash renderings. . . . The title may well serve as a conversation starter . . . in discussions with children about tragic events. Back matter includes factual information about the massacre and biographies of the Emanuel Nine."
Publishers Weekly —

"The President Sang Amazing Grace is one of my Preview selections for Fall 19. The first time I read it I don't think I took a breath. The second time, I burst into tears. I then decided it had to be shared with our Hicklebee's community."
Valerie Lewis, Owner, Hicklebee's —

Zoe Mulford is a singer/songwriter. She is based in Philadelphia and Manchester, UK. Jeff Scher is an Emmy Award–winning filmmaker, animator, and painter whose work is in the collections of major museums. He resides in New York City.