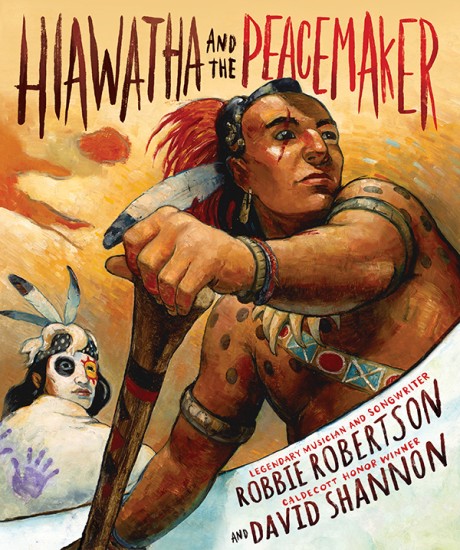 Hiawatha and the Peacemaker

Born of Mohawk and Cayuga descent, music legend Robbie Robertson learned the story of Hiawatha and his spiritual guide, the Peacemaker, as part of the Iroquois oral tradition. Now he shares the same gift of storytelling with parents and children in a beautifully illustrated picture book retelling the story.

The five Haudenosaunee (now more commonly referred to as the Iroquois) Nations are constantly warring with one another, fueled by the evil Chief Tadodaho. The Mohawk warrior Hiawatha, too, is consumed by grief and anger, but a Peacemaker appears and enlists him to assist in joining the tribes together under the Great Law. Hiawatha was a strong and articulate warrior and so was chosen to bring this new message of unity to the warring nations during the 14th century before Europeans arrived in North America. After traveling with the Peacemaker to the different tribes hoping for peace, Hiawatha finds forgiveness within himself.

This message not only succeeded in uniting the tribes but also forever changed how the Iroquois governed themselves—a blueprint for democracy that would later inspire the authors of the US Constitution.

Caldecott Honor–winning illustrator David Shannon brings the journey of Hiawatha and the Peacemaker to life with beautiful full-color oil paintings. Together, Robertson and Shannon have crafted a new children’s classic that will both educate and inspire readers of all ages.

Includes a CD featuring an original song written and performed by Robbie Robertson.

STARRED REVIEW
"Hiawatha and the Peacemaker adds a much-needed, authentic Native American voice to children’s literature. Its message of peace and Shannon’s incredible art make for a winning combination."
Booklist —

"Shannon’s penetrating oil paintings expressively capture the initial tension and uncertainty with which these messengers of peace are met, and the tranquility that replaces it...a CD that includes a song written and performed by Robertson underscore the author’s evident emotional connection to this story and passion for passing it on."
Publishers Weekly —

Robbie Robertson was the lead guitarist and primary songwriter of the legendary musical group the Band and has been inducted into the Rock and Roll Hall of Fame. He lives in Los Angeles.

David Shannon is the beloved author and illustrator of numerous bestselling books for children, including the Caldecott Honor book No, David! He lives in Los Angeles.