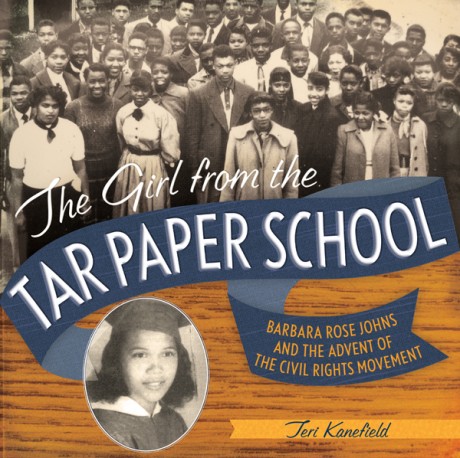 Before the Little Rock Nine, before Rosa Parks, before Martin Luther King Jr. and his March on Washington, there was Barbara Rose Johns, a teenager who used nonviolent civil disobedience to draw attention to her cause. In 1951, witnessing the unfair conditions in her racially segregated high school, Barbara Johns led a walkout—the first public protest of its kind demanding racial equality in the U.S.—jumpstarting the American civil rights movement. Ridiculed by the white superintendent and school board, local newspapers, and others, and even after a cross was burned on the school grounds, Barbara and her classmates held firm and did not give up. Her school's case went all the way to the Supreme Court and helped end segregation as part of Brown v. Board of Education.
Barbara Johns grew up to become a librarian in the Philadelphia school system. The Girl from the Tar Paper School mixes biography with social history and is illustrated with family photos, images of the school and town, and archival documents from classmates and local and national news media. The book includes a civil rights timeline, bibliography, and index.

Praise for The Girl from the Tar Paper School
"An important glimpse into the early civil rights movement."
—Kirkus Reviews

"Based largely on interviews, memoirs, and other primary source material, and liberally illustrated with photographs, this well-researched slice of civil rights history will reward readers who relish true stories of unsung heroes."
—The Bulletin of The Center for Children's Books