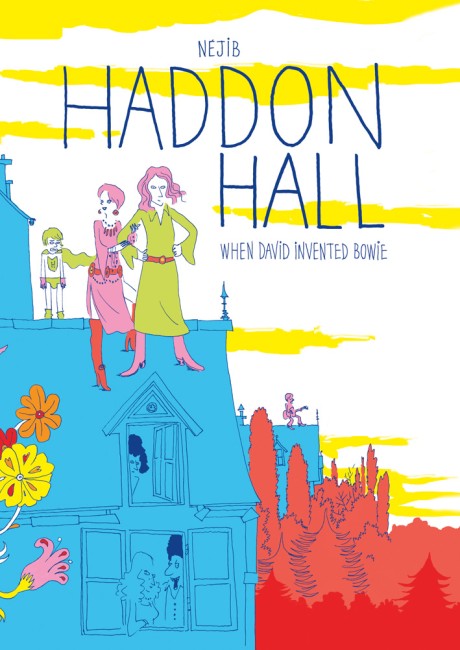 Ziggy Stardust, Aladdin Sane, The Thin White Duke: David Bowie had an extraordinary talent for reinvention. But at the beginning of his career, he made the most significant transformation of his life: from “David” to Bowie.

In 1969, shortly after the release of his first hit single, David and his girlfriend Angie move into Haddon Hall, a sprawling Victorian villa in the London suburbs. Part commune, part creative hub, the house becomes home to a community of musicians, hippies, and hangers-on. As egos clash and parties get out of hand, David keeps writing: “Changes,” “Kooks,” “Life on Mars”—songs that will propel him to global fame. Charting Bowie’s personal life, the development of his music, and the transformation of his image, Haddon Hall is an evocative portrait of a young artist presiding over a musical revolution.

"Haddon Hall thrives in its sharp focus on a specifically influential time in Bowie’s life, the beginning of his metamorphosis from an ordinary folk musician into a glam rock superstar — with some help from his friends, of course. And even though the stories in the book are true... they’re so neatly and sequentially arranged that they create a sense of destiny for its main characters. David Bowie, creator of destinies for his own multiple personas, would certainly be pleased."

"This book is a delight... It shows in its not-too-serious way that creativity can be a grind, and that none of us — not even David Bowie — was born a fully formed artist."
Boing Boing —

Néjib is a graphic designer and comics artist. Born in Tunisia, he now lives and works in Paris.