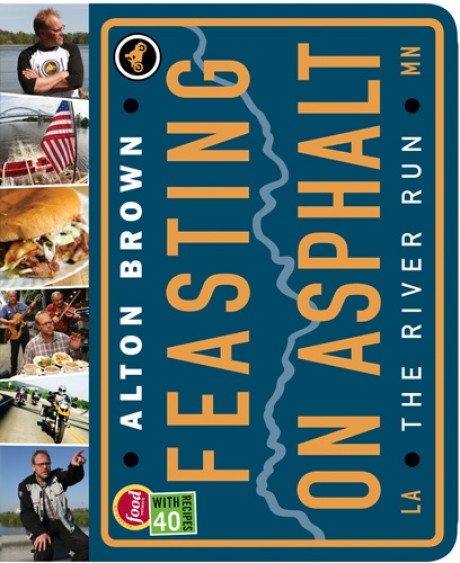 He's on the road again. This time, Alton Brown and his motorcycle-mounted crew are off on a thousand-mile, south-to-north journey that follows America's first "superhighway"—the Mississippi. Starting at the great river's delta on the Gulf of Mexico and ending up near its headwaters in Minnesota, Alton and buddies travel the heartland's byways to scout out the very best of roadside food—and to get to know the people who spend their lives preparing and serving it.

Louisiana-style Grilled Alligator Tail (served simply, with lemon and butter) is one of the book's forty original road-food recipes. Others include Pecan-Coconut Pie from an Arkansan roadside restaurant; BBQ Pork Ribs in Mississippi that Brown eats over pancakes; Vegetable Borscht from St. Paul's Russian Tea House; and Fried Catfish from a riverside burg in Illinois. When it comes to America's foodways and folkways, there's no better tour guide than Alton Brown.

Alton Brown is the writer, director, and host of the Food Network show Good Eats, which won a 2007 Peabody Award, and is the resident food historian, scientist, and color commentator of the network’s Iron Chef America series. In 2004, his book I’m Just Here For the Food won the James Beard Award for Best Cookbook in the Reference category. A regular contributor to Bon Appétit and Men’s Journal magazines, Brown lives in the southern United States with his wife and daughter.

Jean-Claude Dhien was trained as a chef in Europe and now works as a photographer. He accompanied Alton Brown on his first Feasting on Asphalt series in 2006.