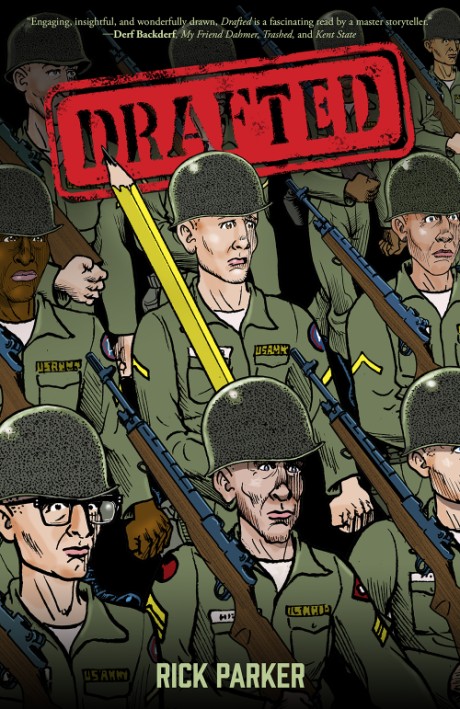 From noted cartoonist Rick Parker comes his long-awaited graphic novel memoir about his time in the United States Army, when he was drafted to serve during the Vietnam War

Drafted is a graphic novel memoir by Rick Parker, a shy, inexperienced, and overly protected teenager who gets drafted into the United States Army at the height of the Vietnam War. The looming threat of deployment informs every aspect of his life, from the most ludicrous experiences to the grimmest tests of endurance. Initially determined to do his patriotic duty, Parker gradually comes to the realization that he is just not cut out for a military career and wants nothing more than to serve his time and return to civilian life to pursue his dream of becoming an artist. In telling this story, he shows how the Vietnam War was the last war in the United States that instituted the draft; how the draft affected those who served; and how we as Americans think of war and our soldiers once they return from service. Parker also describes how being an artist helped him to survive his time in the Army. Drafted is a compelling and unique graphic novel memoir, perfect for fans of Joe Sacco and Derf Backderf, and is sure to appeal to Parker’s dedicated followers and new fans alike—already proven by the response to the award-winning short film Rick Parker, I’m Afraid.

Rick Parker is a cartoonist best known for his work as the artist of the MTV Beavis and Butt-Head comic book series published by Marvel Comics. He is also the illustrator of the Ghoulunatics and a series of parody comics for Papercutz, which includes titles such as Diary of a Stinky Dead Kid, Harry Potty and the Deathly Boring, Breaking Down (a Twilight Saga parody), Percy Jerkson and the Ovolactovegetarians, The Hunger Pains, and The Farting Dead. He lives in Falmouth, Maine.