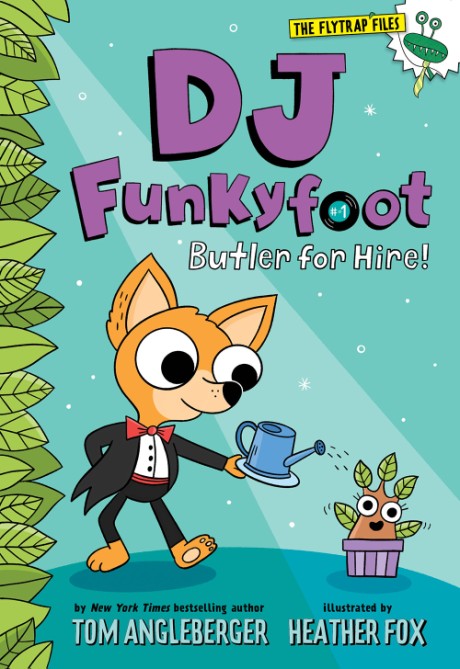 The start of a spin-off chapter book series in the world of the Flytrap Files, from New York Times bestselling author Tom Angleberger—now in paperback!

You’d think from his name that DJ Funkyfoot was a rad hip-hop star, but that’s just the name his parents gave him. DJ Funkyfoot is actually a dog who’s always dreamed of being a butler! He’s the butler-iest butler to have ever buttled, but finding a butler gig is hard these days! So DJ Funkyfoot takes on a job that’s ALMOST like being a butler . . . He becomes a nanny for a baby—and not just any baby: SHRUBBABY, an adorable baby shrub. ShrubBaby may seem cute and cuddly, but she’s got a taste for chaos, thrills, fertilizer, and fame! While a nanny might say “no” to this baby’s whims, a good butler says “yes.” So DJ Funkyfoot says “yes” to every single thing ShrubBaby wants to do. When adventure calls, ShrubBaby says, “Let's go!” and DJ Funkyfoot says, “Very good, m’lady, I’ll fetch your stroller.”

Tom Angleberger talks about the inspiration for the book

Tom Angleberger is the New York Times bestselling author of the Origami Yoda series, the Flytrap Files series, as well as many other books for kids. He lives with his family in Virginia. Heather Fox is an illustrator of stories for children. When she isn’t creating, she is probably drinking a hot cup of coffee, eating Chinese food, or chasing down her dog (Sir Hugo), who has stolen one of her socks. She lives in Lancaster, Pennsylvania, with her husband (and author!), Jonathan Stutzman.