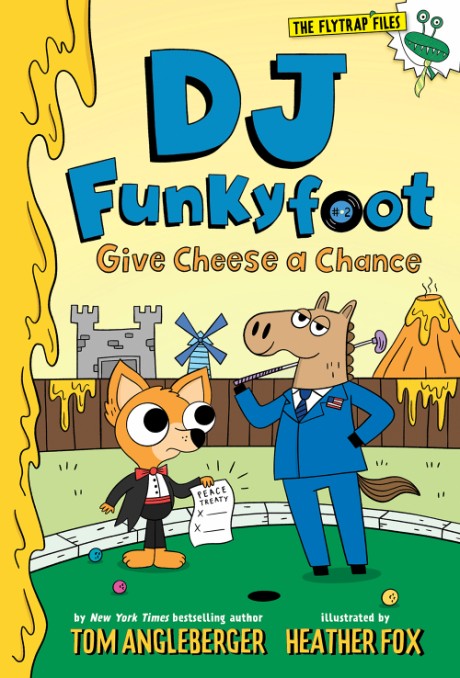 A spin-off chapter book series in the world of the Flytrap Files, from New York Times bestselling author Tom Angleberger!

After working as a nanny for the power hungry ShrubBaby (a deceivingly adorable baby shrub), DJ Funkyfoot—a chihuahua who dreams of being a butler—has finally landed his dream job. A real actual butler gig! He’s been hired to butle for President Horse on the day that the president needs to sign a peace treaty with the Queen of Wingland. But the president doesn’t feel like it. All he wants to do is kick back, relax, and play some mini-golf. It’s up to DJ Funkyfoot to get the president through his mini-golf game quickly so he can get the treaty signed on time to stop the war and save the day!

Tom Angleberger is the New York Times bestselling author of the Origami Yoda series and the Flytrap Files series, as well as many other books for kids. He lives with his family in Virginia. Heather Fox is an illustrator of stories for children. When she isn’t creating, she’s probably drinking a hot cup of coffee, eating Chinese food, or chasing down her dog (Sir Hugo) who has stolen one of her socks. She lives in Lancaster, Pennsylvania, with her husband (and author!) Jonathan Stutzman.