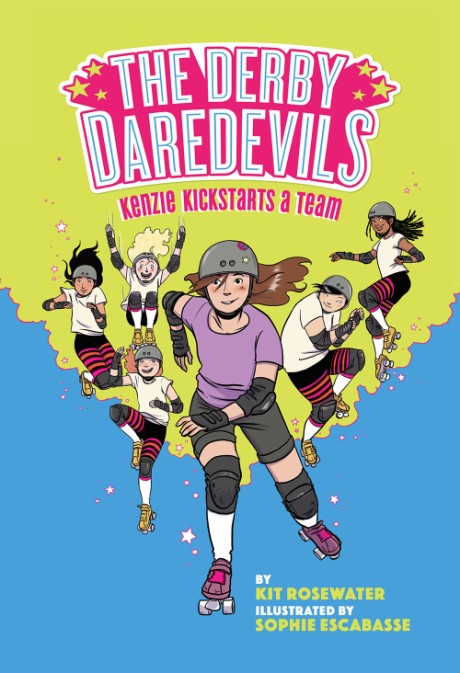 A highly illustrated middle-grade series that celebrates new friendships, first crushes, and getting out of your comfort zone—now in paperback


Ever since they can remember, fifth graders Kenzie (aka Kenzilla) and Shelly (aka Bomb Shell) have dreamed of becoming roller derby superstars. When Austin’s city league introduces a brand-new junior league, the dynamic duo celebrates! But they’ll need to try out as a five-person team. Kenzie and Shelly have just one week to convince three other girls that roller derby is the coolest thing on wheels. But Kenzie starts to have second thoughts when Shelly starts acting like everyone’s best friend . . . Isn’t she supposed to be Kenzie’s best friend? And things get really awkward when Shelly recruits Kenzie’s neighbor (and secret crush!) for the team. With lots of humor and an authentic middle-grade voice, book one of this illustrated series follows Kenzie, Shelly, and the rest of the Derby Daredevils as they learn how to fall—and get back up again.

"A lighthearted celebration of life, friendship, and rolling with the punches."
— Kirkus Reviews

**STARRED REVIEW**
"This a great pick about fierce young ladies coming together through sports. The book has loads of action and plenty of heart, running with themes of friendship, being a good communicator, dealing with jealousy, and even a little sprinkle of how it feels to have a crush on someone you think is just the coolest person ever. Memorable characters and frequent illustrations bring the story to life and will make anyone want to get their derby on."
— Booklist

**STARRED REVIEW**
"In her wonderful debut, Rosewater gives readers a look into the world of roller derby and what it entails, while depicting a relatable story of shifting young friendships... A great addition to juvenile sports fiction for school and public libraries. Perfect for fans of Victoria Jamieson’s Roller Girl, and readers seeking stories about sports-loving girls supporting each other."
— School Library Journal

Kit Rosewater has a master’s degree in children’s literature from Hollins University. The Derby Daredevils is her debut book. She lives in Albuquerque. Find her online at kitrosewater.com or on Twitter and Instagram at @kitrosewater. Sophie Escabasse is the author-illustrator of the forthcoming graphic novel trilogy The Witches of Brooklyn. She lives in Brooklyn with her family. Find her online at esofii.com or on Twitter and Instagram at @esofiii.