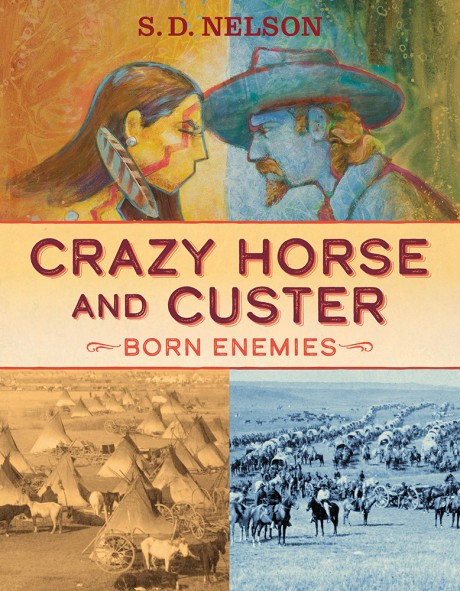 In 1876, Lakota chief Crazy Horse helped lead his people’s resistance against the white man’s invasion of the northern Great Plains. One of the leaders of the US military forces was Army Lt. Col. George Armstrong Custer. The men had long been enemies. At the height of the war, when tribalism had reached its peak, they crossed paths for the last time.

In this action-packed double biography, S. D. Nelson draws fascinating parallels between Crazy Horse and Custer, whose lives were intertwined. These warriors were alike in many ways, yet they often collided in deadly rivalry. Witness reports and reflections by their peers and enemies accompany side-by-side storytelling that offers very different perspectives on the same historical events. The two men’s opposing destinies culminated in the infamous Battle of the Greasy Grass, as the Lakota called it, or the Battle of the Little Bighorn, as it was called by the Euro-Americans.

In Crazy Horse and Custer, Nelson’s gripping narrative and signature illustration style based on Plains Indians ledger art, along with a mix of period photographs and paintings, shines light on two men whose conflict forever changed Lakota and US history.

The book includes an author’s note, timeline, endnotes, and bibliography.

“I can think of no other book that does a better job of helping the reader experience the complexity of this period in American history, not just from the Euro-American point of view but also from that of the indigenous nations of the Great Plains. The fact that SD Nelson avoids demonizing or deifying either of these two men is truly remarkable. At this time when so many things are being said, written, and done that divide us as a nation we need more books with the balance of Crazy Horse and Custer: Born Enemies.”
Dr. Joseph Bruchac, celebrated Abenaki writer and author of One Real American —

“With startling beauty and immediacy, two hero-boys born into opposing cultures become alive on the pages of S.D. Nelson’s Crazy Horse and Custer, Born Enemies. Nelson presents two clashing historical views and takes readers on a profound and fascinating journey. A page-turner, an eye-opener, both beautiful and tragic.”
Nancy Bo Flood, award-winning author of Cowboy Up! Ride the Navajo Rodeo —

“What a storyteller Nelson is! With clear prose that reads at times like poetry and with his own glorious artwork, he shines a light on two worlds--the Lakota’s free life on the plains and the whites’ society as it pushes toward its ‘Manifest Destiny.’  This book is a treasure—profound, informative, and a delight to read.”
Nancy Plain, award-winning author of This Strange Wilderness —

“S. D. Nelson’s richly illustrated book brings to life traditional Lakota culture and that of a young, expanding United States, both presented through the lives of their most celebrated warriors: Crazy Horse and George Armstrong Custer. Nelson uses word images, historic paintings and photographs as well as his own magical illustrations to weave a tapestry of life and conflict in the West of Nineteenth Century America.  A magnificent book.”
Bill Markley, journalist and author of Geronimo and Sitting Bull: Leaders of the Legendary West —

"Historical context is tightly woven throughout the trim text, and the rapid toggling between Custer and Crazy Horse, and between Lakota and U.S. Army campaigns, builds narrative tension that keeps the pages flying."
The Bulletin of the Center for Children's Books —

"The taut writing and short chapters are the perfect vehicle for presenting the epic conflict between the war leaders and make this a great selection for reluctant readers."
School Library Journal —

"An engaging dual biography. . .A mixture of historic photos and paintings augment the text, while the author’s ledger-style drawings—rendered in ink, colored pencils, and acrylic paint—successfully honor Lakota artwork of the late 1880s."
Publishers Weekly —

S. D. Nelson talks about the inspiration for the book

S. D. Nelson is a member of the Standing Rock Sioux Tribe in the Dakotas. He is the award-winning author and illustrator of a number of books, including Red Cloud, Sitting Bull, Black Elk's Vision (winner of the Western Writers of America Spur Storyteller Award and named a Chicago Public Library Best of the Best), and many more. He lives in Flagstaff, Arizona.