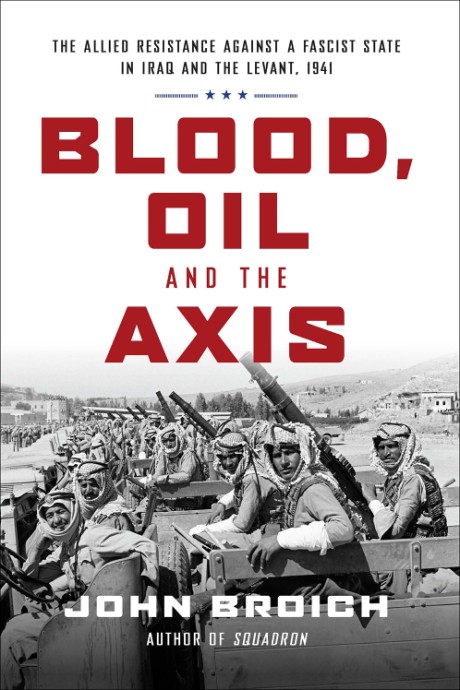 Buy
Blood, Oil and the Axis
The Allied Resistance Against a Fascist State in Iraq and the Levant, 1941
By John Broich

Spring 1941 was a high point for the Axis war machine. Western Europe was conquered; southeastern Europe was falling, Great Britain on its heels; and Rommel’s Afrika Korps was freshly arrived to drive on the all-important Suez Canal. In Blood, Oil and the Axis, historian John Broich tells the story of Iraq and the Levant during this most pivotal time of the war. The browbeaten Allied forces had one last remaining hope for turning the war in their favor: the Axis running through its fuel supply. But when the Golden Square—four Iraqi generals allegiant to the Axis cause—staged a coup in Iraq, elevating a pro-German junta and prompting military cooperation between Vichy French–occupied Syria and Lebanon and the Axis, disaster loomed. Blood, Oil and the Axis follows those who participated in the Allies’ frantic, improvised, and unlikely response to this dire threat: Palestinian and Jordanian Arabs, Australians, American and British soldiers, Free French Foreign Legionnaires, and Jewish Palestinians, all who shared a desperate, bloody purpose in quashing the formation of an Axis state in the Middle East. Memorable figures of this makeshift alliance include Jack Hasey, a young American who ran off to fight with the Free French Foreign Legion before his own country entered the war; Freya Stark, a famous travel-writer-turned-government-agent; and even Roald Dahl, a twenty-three-year-old Royal Air Force recruit (and future author of beloved children’s books). Taking the reader on a tour of cities and landscapes grimly familiar to today’s reader—from a bombed-out Fallujah, to Baghdad, to Damascus—Blood, Oil and the Axis is poised to become the definitive chronicle of the Axis’s menacing play for Iraq and the Levant in 1941 and the extraordinary alliance that confronted it.

Broich tells the story with enthusiasm and an impressive ability to summarize big-picture complexities. . . . In places, as spies stalk the region, the material is like Casablanca meets The English Patient. . . . Broich’s research in original documents and archives is impressive, his telling of the story in part through personal accounts is unique and his point of view is free of tedious ideological ax-grinding.
— The Wall Street Journal