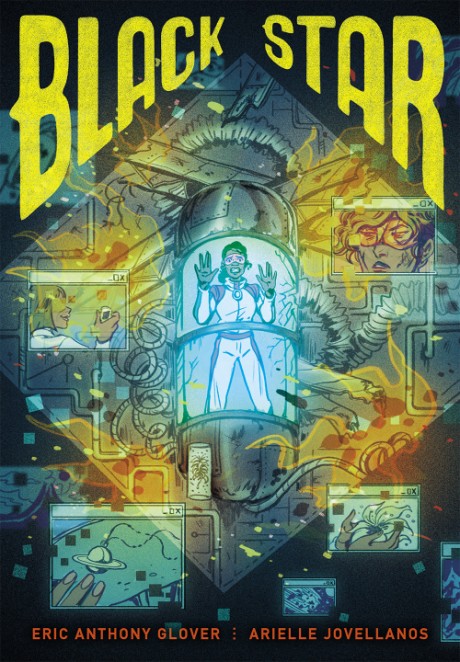 Stranded on an alien planet, two astronauts must battle deadly elements and each other to recover a reserve shuttle built for one

Black Star is a debut graphic novel by Eric Anthony Glover, based on his original unproduced screenplay, and illustrated by Arielle Jovellanos. In the future, interstellar travel is past its prime and sending shuttles beyond our solar system—even for vital scientific research—is a life-threatening gamble. However, in order to retrieve samples of an alien flower that may hold the key to saving countless lives, Harper North and her crew of scientists must journey to Eleos, a dangerous planet in deep space.
But as they approach Eleos, their ship is caught in an asteroid storm and as it hurtles towards the surface, its reserve shuttle detaches, landing over 100 kilometers away. When the rest of the crew perishes in the burning wreckage of the ship, North races towards the rescue shuttle built for one, hoping to fulfill their mission and survive.
But North isn’t alone: The team’s wilderness expert is still alive and hell-bent on hunting North down and claiming the shuttle for herself.
Now, North has no choice but to reach the shuttle first—and fast. The fuel is leaking. Her GPS battery is dying. And the planet’s deadly seasonal change is coming. As she battles the flora and fauna and tries to elude her ruthless former crew mate, North will find the cost of survival is dear . . . Will she be willing to pay that price?

Eric Anthony Glover studied screenwriting at Sarah Lawrence College and studied feature and television writing as a 2016 Final Draft Big Break Fellow in Burbank, California. Glover is committed to writing about underrepresented groups and hopes to make the world a better place with this work. Arielle Jovellanos is a New York-based freelance illustrator, writer, and comic artist. Her work has been featured in the Eisner and Harvey–nominated anthology Fresh Romance and in magazines, comics, books, and branded social media campaigns. Recently, Jovellanos illustrated the book Fierce Heroines: Inspiring Female Characters of Pop Culture for Running Press Kids.