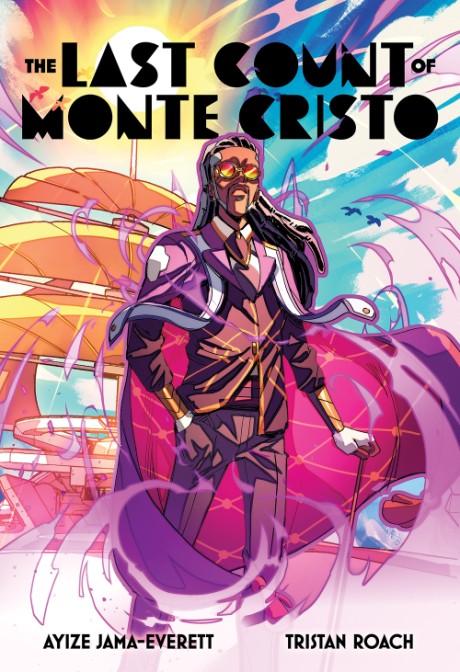 The Last Count of Monte Cristo

The Last Count of Monte Cristo is a bold retelling of Alexandre Dumas’s classic tale of love, betrayal, revenge, and redemption. This speculative update pushes the narrative into a future hundreds of years after the polar ice caps have melted and submerged our planet into a new era of technology and culture. In this futuristic reinterpretation, author Ayize Jama-Everett and illustrator Tristan Roach revisit the original inspiration of The Count of Monte Cristo—Alexandre Dumas’s own father. A greatly respected general during the French Revolution, Dumas was one of the highest-ranking officers of African descent in a Western army in history. Like the protagonist of his son’s story, General Dumas was betrayed and spent years in prison before getting a chance to return to his beloved France. The Last Count of Monte Cristo is a radical and powerful graphic novel update that reclaims the cultural heritage of Dumas’s tale and suggests the terrible future that could threaten the human race if we continue to destroy our planet.

Ayize Jama-Everett has traveled extensively in Africa, New Hampshire, Northern California, and Mexico. He holds a master’s degree in clinical psychology, divinity, and creative writing. Jama-Everett has taught at the Graduate Theological Union and California College of the Arts, and was a school therapist for ten years in Oakland. He believes the narratives of our times dictate the realities of the future, so he’s invested in working in subversive notions like family of choice, striving when not chosen to survive, and irrational optimism into his work. He lives in Harlem. Tristan Roach is based in Barbados and holds a BFA in graphic design. He is the owner and creative director of the multimedia studio BounceHouse Creative Studio, which utilizes mediums such as graphic design, animation, and illustration. Roach is one of the founding members of Beyond Publishing Caribbean and has worked on multiple indie titles and his own, including Spirit Bear. His work in comics has earned him a Gold Angel Award, among others.