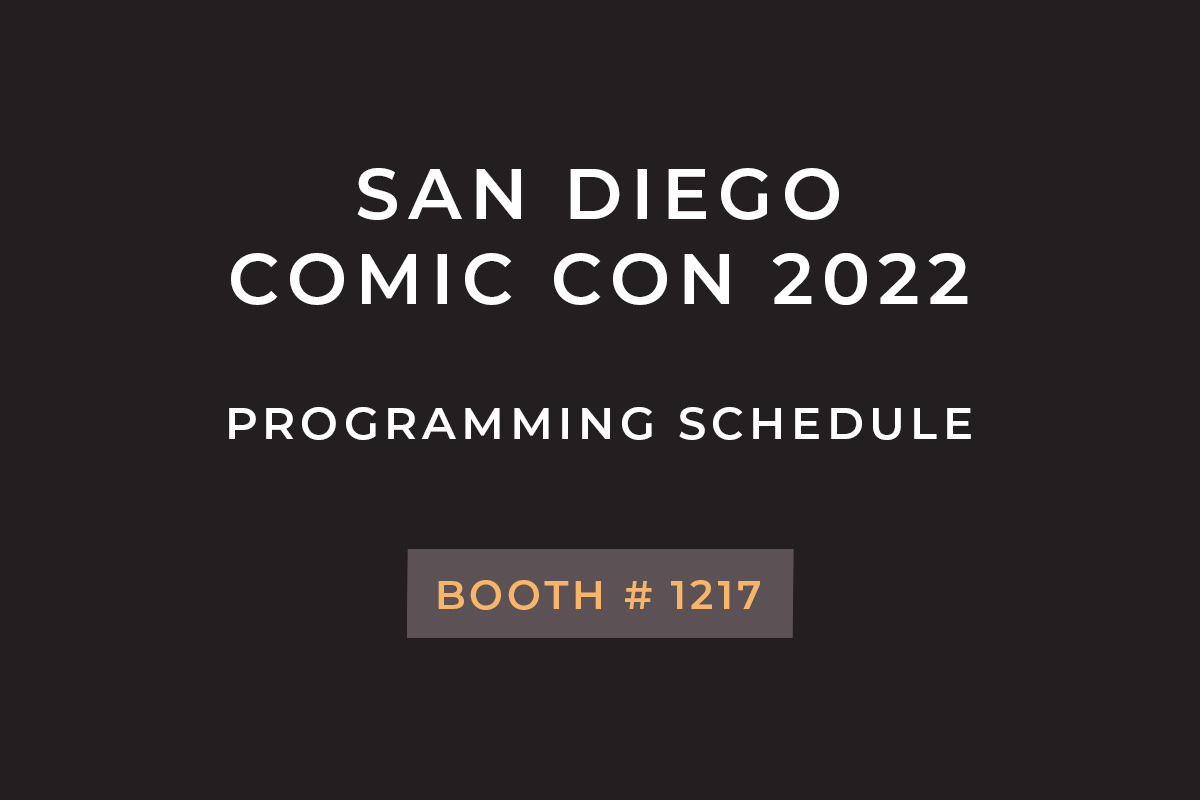 Take your pick of a story starring your favorite characters!

Bringing Back Marvel Classics for Today’s Readers for All Ages

Going Viral: The Power of BookTok

Join BookTok stars and authors Alex Aster (author, Lightlark), Chloe Gong (author, These Violent Delights), and Adam Silvera (author, They Both Die at the End) to discuss the power of BookTok, the secrets of the platform, and how one TikTok video changed their lives. Alex, Chloe, and Adam will discuss their favorite books and invite audience members to give their own recommendations. A final “SDCC BookTok TBR list” will be shared on social after the panel. There will also be surprise announcements.

Masters of the Universe: 40 Years

Kevin Smith (Netflix’s Masters of the Universe: Revelation) interviews some of the greats from MOTU’s history, including talent and creators from each era, spanning toys, film, TV, and publishing, including ABRAMS author Gregory Mone (He-Man and the Masters of the Universe: The Hunt for Moss Man). Hear why MOTU has been a pop culture sensation for four decades and get a sneak peek at what’s to come.

Gregory Mone will sign He-Man and the Masters of the Universe: The Hunt for Moss Man

Choose your next page-turning read!

John Jennings will sign Kindred, Parable of the Sower, and After the Rain, Alverne Ball will sign Across the Tracks, and Steven Barnes will sign The Eightfold Path

Mark Evanier and Chip Kidd will sign Fantastic Four No. 1: Panel by Panel

Join bestselling comics creator John Jennings as he introduces Megascope, a newly launched line of graphic novels from Abrams ComicArts dedicated to showcasing speculative and non-fiction works by and about people of color, with a focus on science fiction, fantasy, horror, history, and stories of magical realism. Jennings will share the creative process and vision behind the line, highlight recent releases, and give a sneak preview of what’s coming up. Joining the panel are Megascope authors Alverne Ball (Across the Tracks), Tananarive Due, Steven Barnes, and Marco Finnegan (The Keeper); Jeremy Love (The Resurrectionists), and Abrams ComicArts Senior Editor Charlotte Greenbaum.

First You MARCH; Then you RUN

First you MARCH, then you RUN. Join a special gathering of Congressman John Lewis’s collaborators on RUN, the acclaimed follow-up to his National Book Award-winning and #1 bestselling graphic novel series MARCH, to celebrate the astounding creativity and influence of John Lewis’s unparalleled journey as a comics creator. Artists Nate Powell and L. Fury, along with John Lewis’s longtime collaborator, congressional aide, and co-author Andrew Aydin as well as the late Congressman’s son John-Miles Lewis, will discuss the making of RUN, comics’ unique role in US history, and the special place Comic-Con held in the civil rights icon’s heart. The panel will be followed by a “Children’s March” held in tribute to the marches led by Congressman Lewis at Comic-Con over the years.

ABRAMS, Dark Horse Comics, and Magpie Games are thrilled to treat fans to a panel worthy of the Avatar! Join publishing’s creators and writers of Avatar, The Last Airbender and The Legend of Korra, F. C. Yee (author, Chronicles of the Avatar), Brendon Conway (co-owner, Magpie Games), and Janet Varney (voice, The Legend of Korra animated series), and moderator Cara O’Neil (Senior Director of Marketing, Dark Horse Comics) to explore the past, present, and future of the beloved world.

Nate Powell will sign Save It for Later and Run: Book One

Join bestselling author Mariko Tamaki as she introduces Surely Books, a newly launched line of graphic novels from Abrams ComicArts dedicated to expanding the presence of LGBTQIA creators and content in the comics world. Tamaki will share the creative process and vision behind the line, highlight recent releases, and give a sneak preview of what’s coming up. Joining the panel are Surely authors Grace Ellis (Flung Out of Space), Talia Dutton (M Is for Monster), and Josh Trujillo (Washington’s Gay General) and Abrams ComicArts Senior Editor Charlotte Greenbaum.

The Wild History and Peculiar Influence of Underground Comix

Brian Doherty, author of a new history of underground comix, Dirty Pictures: How an Underground Network of Nerds, Feminists, Misfits, Geniuses, Bikers, Potheads, Printers, Intellectuals, and Art School Rebels Revolutionized Art and Invented Comix, will lead a discussion with Gary Groth (longtime editor of The Comics Journal and publisher of Fantagraphics) and renowned cartoonist Gilbert Hernandez (Love and Rockets) about the past, present, and future of underground comix’s impact on the comics form, discussing how a legacy of graphic transgression, often hilarious and frequently troubling, by the likes of Robert Crumb, S. Clay Wilson, Howard Cruse, Art Spiegelman, Diane Noomin, Spain Rodriguez, and Aline Kominsky-Crumb blew open a space for the exploration of autobiographical feminism, gay coming-of-age, and comics-as-museum-worthy art while remaining as crude, vulgar, and hilarious as comics can get.