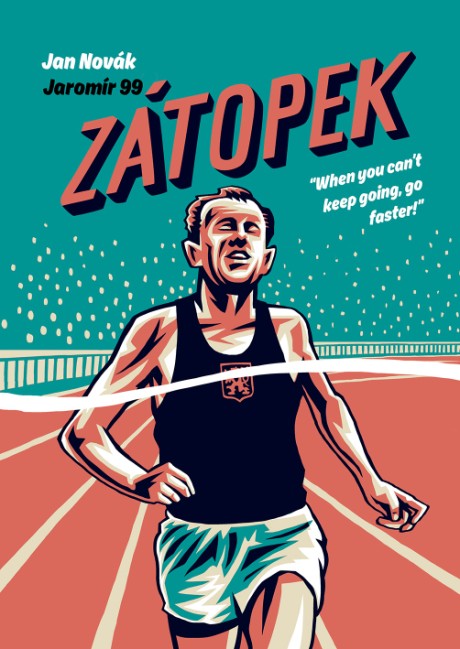 Emil Zátopek is arguably the greatest Olympic champion of all time. The Czech runner’s three gold medals at the 1952 Helsinki Summer Olympics, for the 5,000 meter, 10,000 meter, and marathon, is an achievement that has never been matched. His success as a runner made him a national hero, but as a public figure, outspoken and unafraid to take a stand, he was equally impressive.
Even before the Helsinki Games, Zátopek had scored a remarkable victory, successfully pressuring the communist regime to allow his colleague Stanislav Jungwirth, who until then had been excluded on political grounds, to compete. In Zátopek, Jan Novák and Jaromír 99 trace the extraordinary life and times of the great Olympian, from his first meeting with Dana, the love of his life, to the victories that would ensure his lasting legacy.

“This new graphic novel tells the incredible story of Zátopek like you’ve never heard, er, seen it before.”
Runner's World —

Jan Novák is a Czech-American writer, screenwriter, and playwright. He has won the Chicago Maroon’s short story contest, as well as the Carl Sandburg Literary Award from the Chicago Public Library Foundation. Jaromír 99 is a Czech singer, songwriter, and artist who is best known for his work with Jaroslav Rudiš on the comics trilogy Alois Nebel. He is also the author (with David Zane Mairowitz) of The Castle, an adaptation of Kafka’s novel, which is also published by SelfMadeHero.