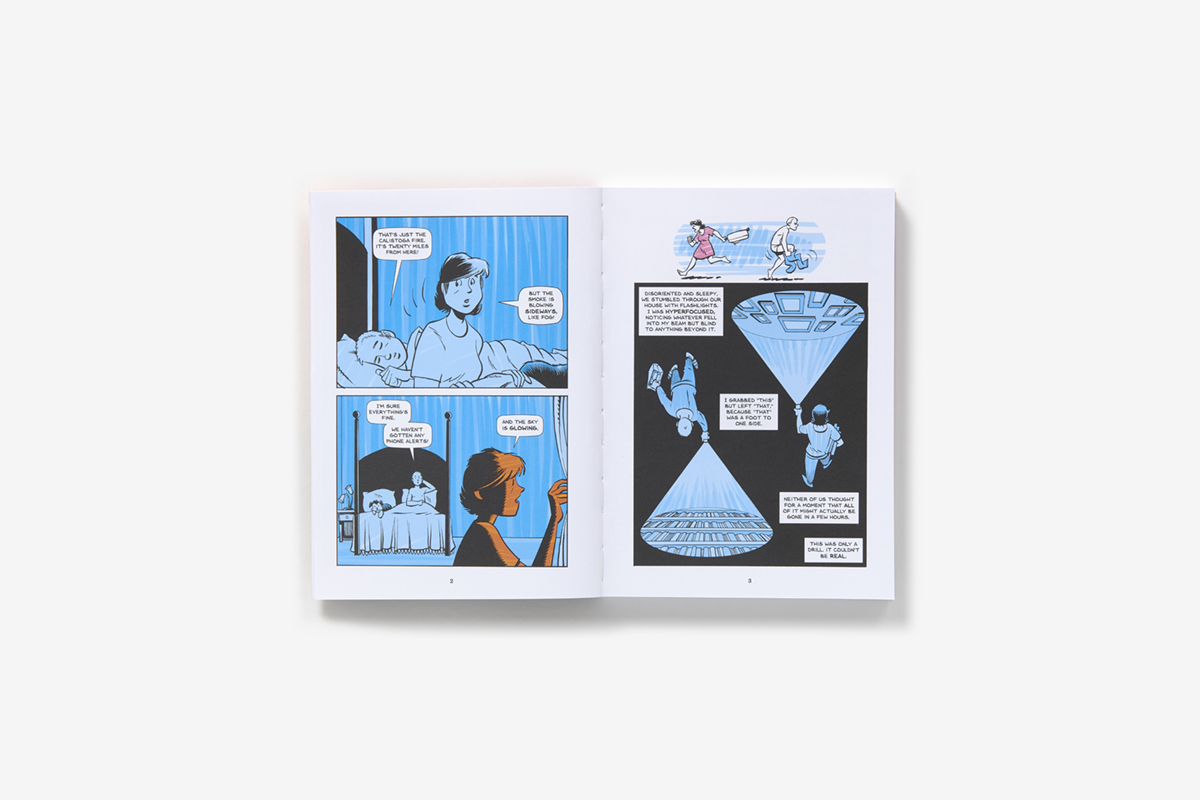 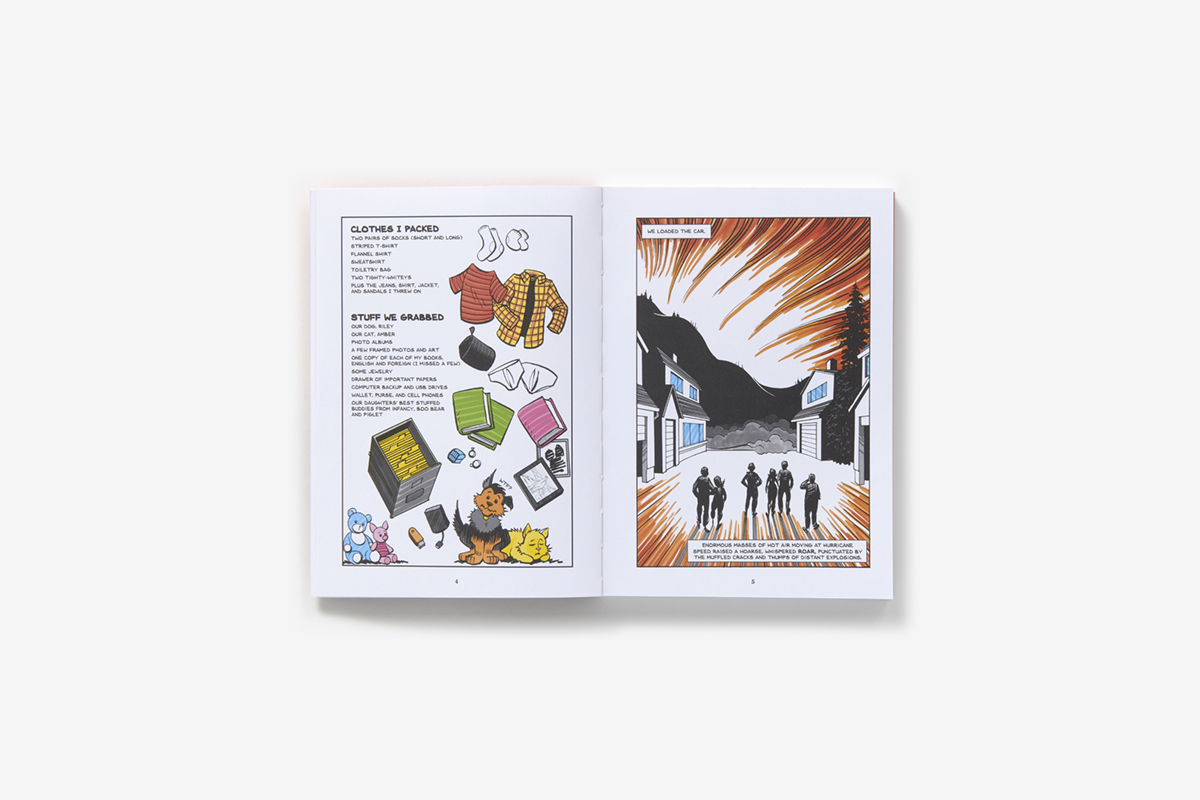 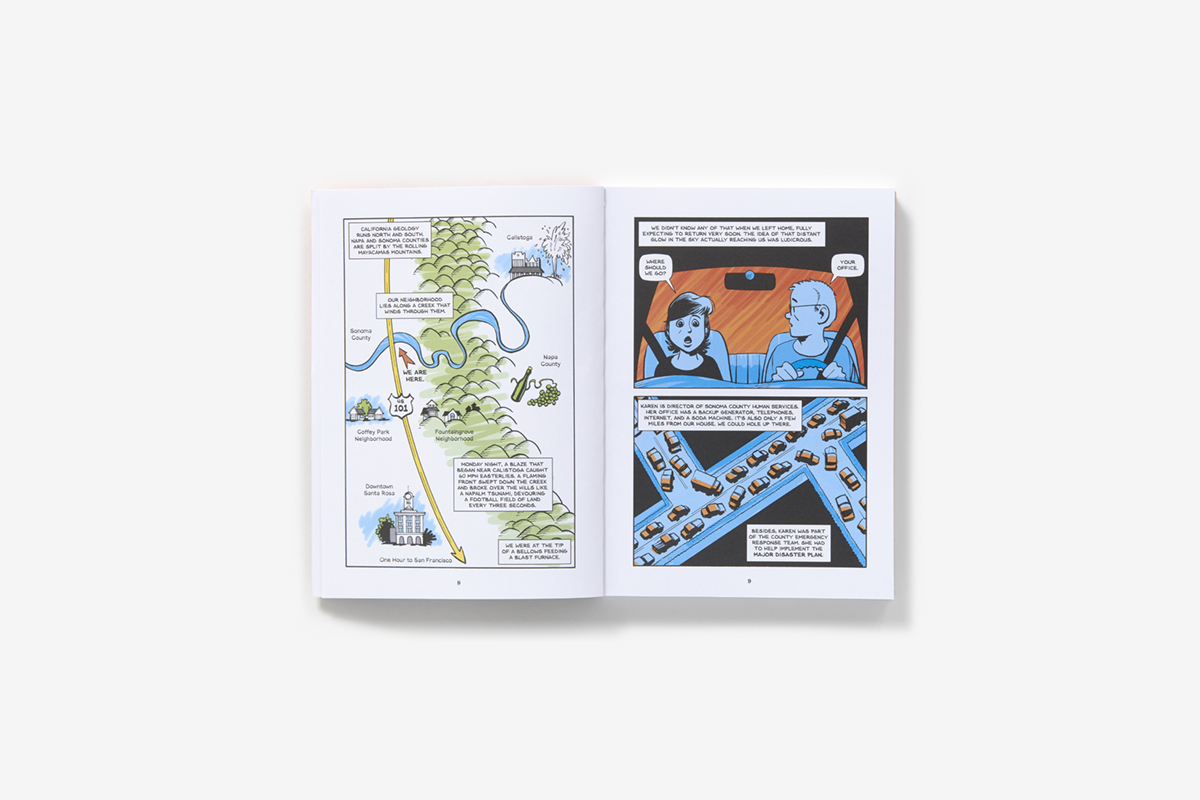 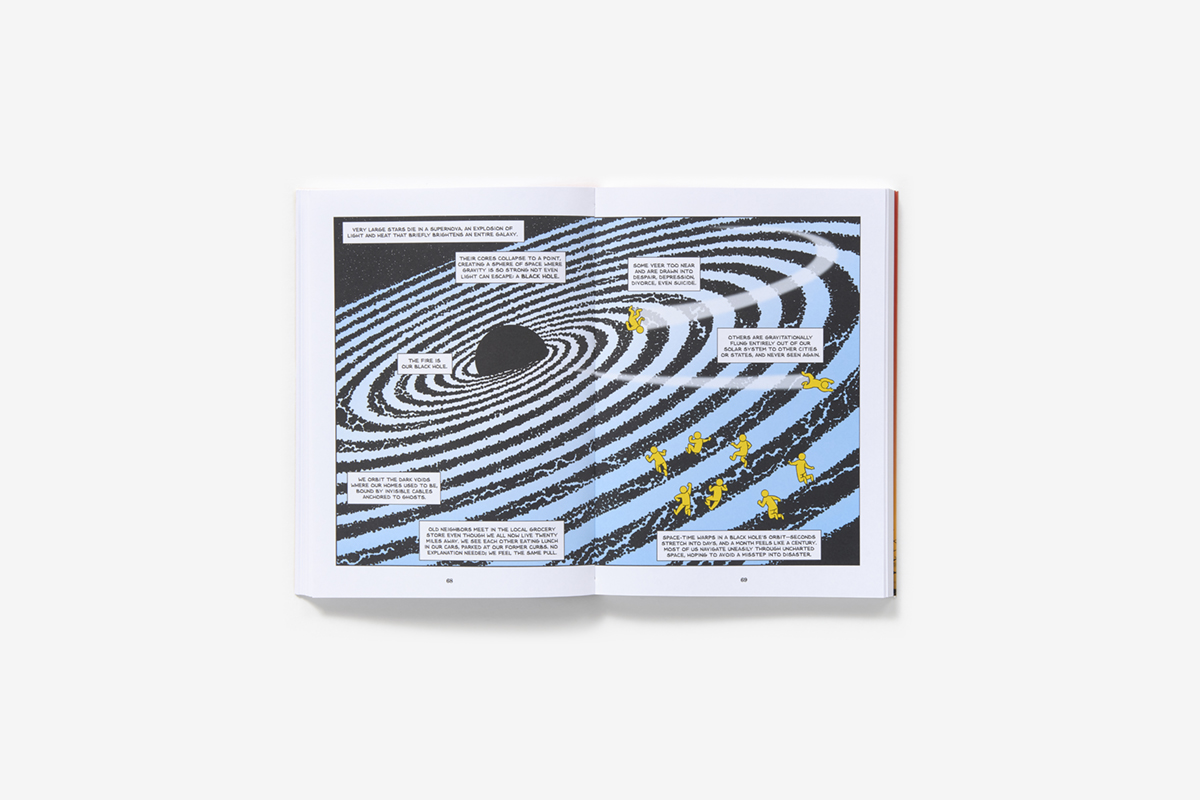 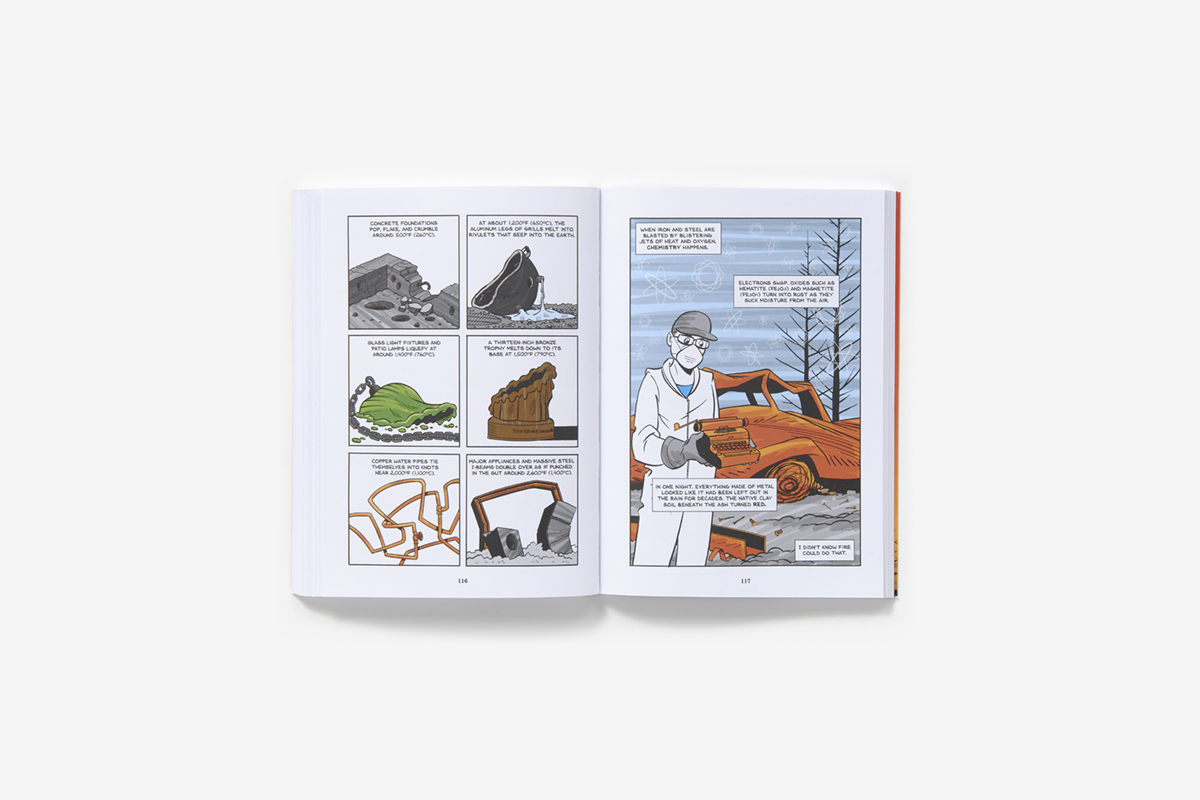 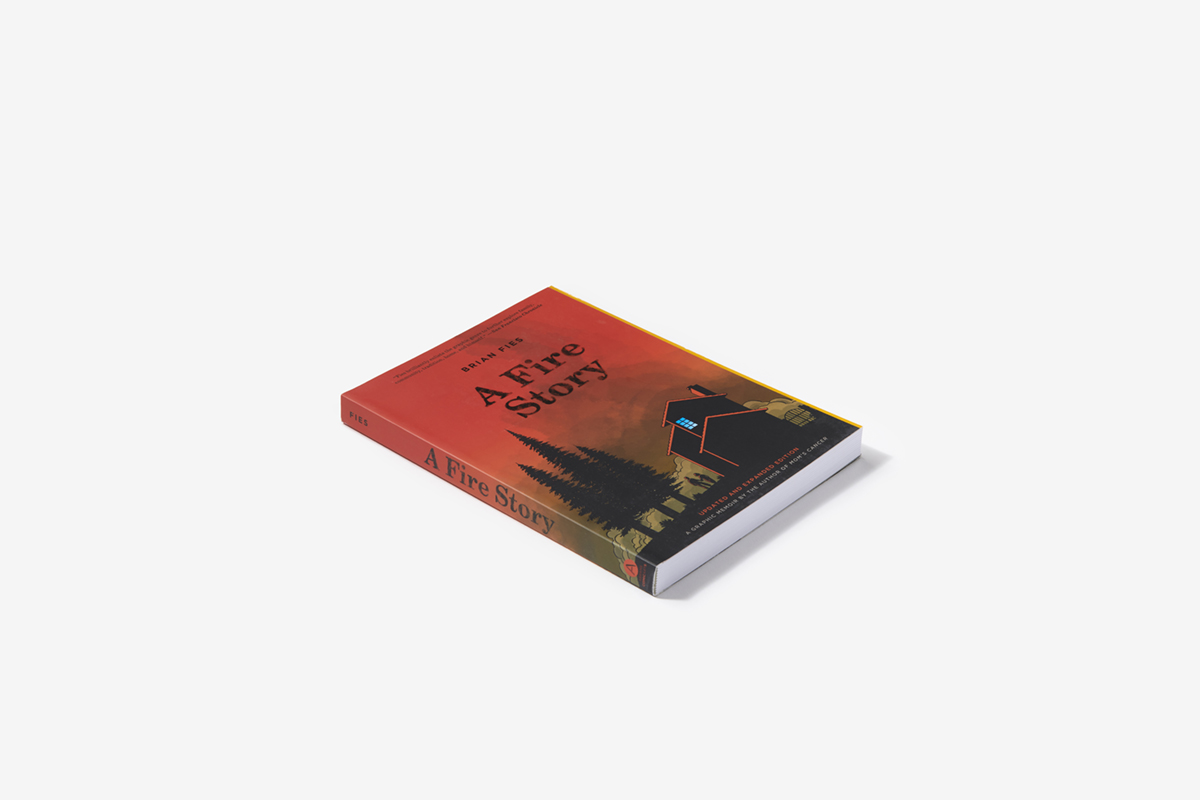 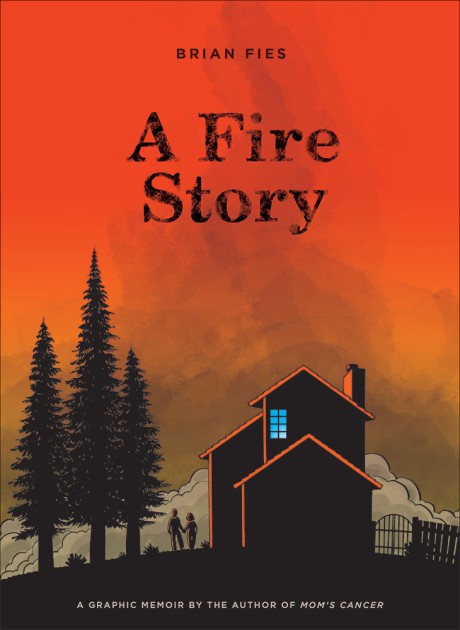 Early morning on Monday, October 9, 2017, wildfires burned through Northern California, resulting in 44 fatalities. In addition, 6,200 homes and 8,900 structures and were destroyed. Author Brian Fies’s firsthand account of this tragic event is an honest, unflinching depiction of his personal experiences, including losing his house and every possession he and his wife had that didn’t fit into the back of their car. In the days that followed, as the fires continued to burn through the area, Brian hastily pulled together A Fire Story and posted it online—and it immediately went viral. He expanded his original web comic to include environmental insight and the fire stories of his neighbors and others in his community. This paperback version includes 32 new pages that bring the story up-to-date. A Fire Story is a candid testimony of the wildfires that left homes destroyed, families broken, and a community determined to rebuild.

“Drawings, words, and a few photos combine to convey the depth of a tragedy that would leave most people dumbstruck.”
Kirkus Reviews - STARRED review —

“‘On Monday, my house disappeared,’ begins this quietly devastating graphic memoir . . . Despite the pain he and his wife endure sifting through the ashes, Fies goes light on sentimentality, instead focusing on the realities of surviving the crisis and rebuilding literally from the ground up . . . Without pleading or preaching, this affecting record guides readers through the experience of enormous loss, then out through the other side.”
Publishers Weekly, Starred Review —

“…a full-length graphic novel that shifts between his own tragedy and the larger picture of how the blaze devastated his Santa Rosa community. Breakout stories spotlighting some of his neighbors deepen the book’s emotional tug.”
The Washington Post —

“As striking as it is detailed.”
Entertainment Weekly —

“An effective snapshot of a broad disaster.”
io9 —

“Brian Fies sat down with some Sharpies and some paper to process his pain the way he knows best. He began to draw. The result is A Fire Story . . . a webcomic that recounts the heart-wrenching devastation the California wildfires has wrought. Fies is a graphic novelist, one of the best in his field. A few years ago, when his mom was battling terminal cancer, he processed his grief by writing the comic Mom’s Cancer. It won an Eisner Award, one of the comic world’s highest achievements. Now he’s had to do it all over again.”
CNN —

“The unimaginable has been laid out on the page by author and artist Brian Fies. Brian’s own story provides the framework, but he also incorporates the vivid recollection of others to paint a picture of a horrendous night and its aftermath. A Fire Story is more than just a graphic novel, it is journalism and memoir at its best.”
Jean Schulz, President, the Charles M. Schulz Museum and Research Center in Santa Rosa, California —

“A Fire Story is that most potent of accounts, both immediate yet timeless. Brian Fies’s deceptively simple words and pictures drew me in from page one, then delivered a triple punch to the gut: clutching dread, followed by hollow despair, and ultimately quiet, unquenchable determination. You don’t merely read this, you feel it.”
Richard Pini, ElfQuest —

“A Fire Story grabs you from the first page, drawing you in with its harrowing and uplifting tale of loss, survival, and the power of community. Fies is a master storyteller who uses his skills as a cartoonist to create deeply personal stories with lasting impact.”
Jeff Kinney, Diary of a Wimpy Kid —

“‘I inhaled my neighbors’ lives.’ Brian Fies‘s description of his first sensory encounter after a fire destroyed his entire neighborhood took my own breath away in this powerful graphic account of a family’s loss from the devastating California wildfires.  Though a heartbreaking read, Brian still inspires with his honesty and humanity while taking us on a journey of recovery after losing both home and possessions.”
Ann Telnaes —

“A Fire Story is a perfect storm of a book, an individual graphic memoir that tells the larger story of a community, a comic that is the result of both long years of work and a viral internet sensation, a literal perfect storm of weather and human behavior that resulted in one of the most devastating wildfires of all time.”
The A.V. Club —

""A Fire Story" has the feel of a touchstone book, something that will only (sadly) gain relevance as more and more of us are displaced by severe weather incidents that take our loved ones and our possessions, wiping away whole neighborhoods. It's exquisitely and subtly told.”
Boing Boing —

“It’s a moving and informative piece of journalism, one that relates not only the Fies couple’s ordeal, but the experiences of others.”
Bay Area News Group —

Brian Fies is a writer and cartoonist of the award-winning graphic novels Mom’s Cancer and Whatever Happened to the World of Tomorrow? Although Fies lost his home, he and his wife have rebuilt and are living once again in their old neighborhood in Santa Rosa, California.