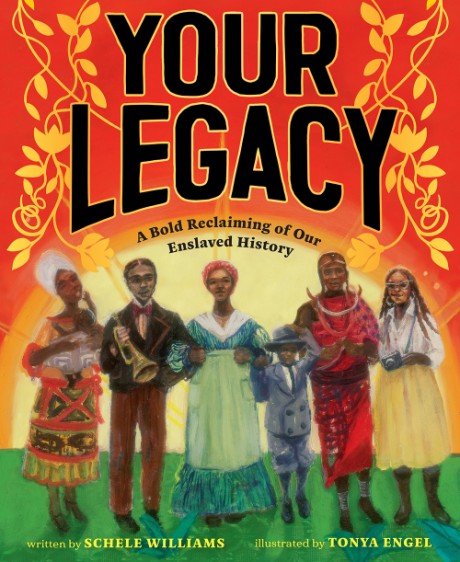 A Bold Reclaiming of Our Enslaved History

Your story begins in Africa.
Your African ancestors defied the odds and survived 400 years of slavery in America and passed down an extraordinary legacy to you.

Beginning in Africa before 1619, Your Legacy presents an unprecedentedly accessible, empowering, and proud introduction to African American history for children. While your ancestors’ freedom was taken from them, their spirit was not; this book celebrates their accomplishments, acknowledges their sacrifices, and defines how they are remembered—and how their stories should be taught.

"We are grateful to Schele and her dedication to making our beautiful history accessible to our children! Your Legacy is an educational and celebratory piece we’ve enjoyed sharing with our family. We are extremely excited for this story to be shared with other families as we continue to celebrate our rich history in this world."
Dwyane Wade and Gabrielle Union Wade, New York Times bestselling authors —

"Your Legacy is a beautiful and powerful book that empowers children to reclaim and celebrate their ancestral history with pride. Schele Williams writes with a unique and important lens which will directly impact, inspire, and build confidence in Black youth."

**STARRED REVIEW**
"This thoughtful, sensitive, and beautiful volume, families can begin a difficult conversation in a nurturing way.This is a must for every Black child growing up in the Americas and will help other races and ages too. . .A truly powerful perspective shift."
Kirkus Reviews —

**STARRED REVIEW**
"Bright, brilliant, page-filling illustrations perfectly capture the joyous tone. . .Not focused on recrimination or placing blame, this book is a celebration of perseverance and dignity that deserves a wide audience."
Booklist —

Illustrator Tonya Engel talks about her favorite scene from the book

Schele Williams is a Broadway director committed to cultivating new musicals and devised work. She is directing the upcoming Broadway revivals of Aida (Disney Theatrical Group) and The Wiz  as well as the premieres of Mandela the Musical and Indigo. She has directed at regional theaters and festivals across the country and has a long history of work on Broadway in Rent, Aida, and Motown: The Musical. Passionate about pairing social justice with the arts, Schele is on the steering committee of We Stand United and is a founding member of Black Theatre United, an organization committed to dismantling systemic racism on our streets and stages. She has been a member of Broadway Inspirational Voices for over two decades and serves as Chairperson of the Board. Tonya Engel is a self-taught artist living in Houston, Texas. Folk artists of the deep South have influenced her work, as well as contemporary masters such as Marc Chagall, Frida Kahlo, Romare Bearden, and Gustav Klimt. Her bold style is figurative, textured, colorful, and ripe with symbolism. Engel made a spectacular debut in children’s publishing with her illustrations in Rise!: From Caged Bird to Poet of the People, Maya Angelou, written by Bethany Hegedus and published by Lee & Low Books in 2019, and the recently published My Hair is Magic! by M.L. Marroquin.