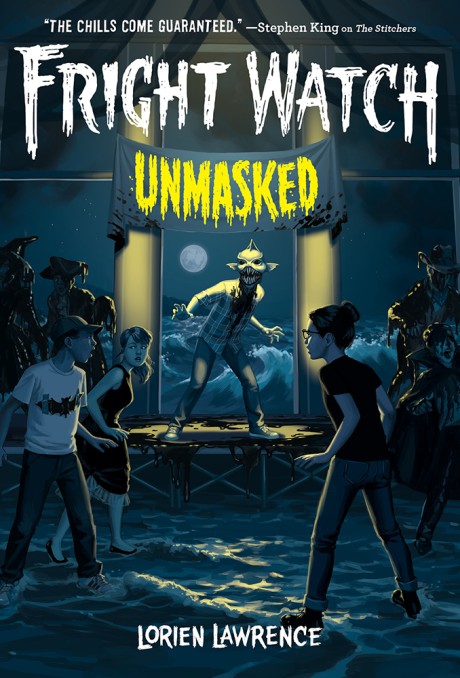 Having suffered from anxiety attacks since she was eight years old, creating monsters has become a sort of therapy for Marion Jones: When she sculpts and paints, her fingers don’t tingle, the heaviness lifts from her chest, and she can actually breathe. So instead of grabbing pizza and milkshakes after school like most other kids in South Haven, Marion holes up in her room, working away on her monsters. And it’s paid off, because she’s just finished her first full-face mask: a gruesome sea monster she’s named Winston.

However, Halloween arrives with a Super Blue Blood Moon, and its powers somehow manage to bring Winston to life. To make matters worse, Marion’s crush, Tyler Dash, becomes the object of Winston’s possession as soon as he tries on the mask, turning him into a red-flannel and Converse high-top wearing Creature from Connecticut. Marion has no choice: She has to follow Tyler to the Halloween dance to try and stop him. Will she be able to figure out what’s happened to Tyler and stop the monster from wreaking further havoc on the school? Or has she made a real-life monster that’s here to stay?

“Unmasked is tailor made for monster lovers. This tale of a young makeup artist caught in a swirl of anxiety, creative dreams, crushes, friendship, and monsters is the book I wish I had when I was a kid. With skill and heart, Lawrence blends both chills and laughs. The Fright Watch series is a must-read for young horror fans and this new book is the perfect dose of spooky fun!”
Mallory O'Meara, bestselling author of The Lady from the Black Lagoon —

“Fun, frights, and finfolk—Lorien Lawrence's Unmasked is a fantastic Halloween party of a book.”
J.W. Ocker, author of The Black Slide —

“Once I started reading, I couldn't put it down! It was so creepy, but also managed to be sweet and funny! I went from being tense and scared to laughing out loud. And that ending. . . I was on the edge of my seat wondering what was going to happen. Lorien wonderfully merges scary with the complexity and awkwardness of Middle School. You know these characters, you may have been one of these characters. From beginning to end you're in for a spooky adventure that leaves you wanting more!”
Daka Hermon, author of Hide and Seeker —

“All the thrills and chills of your favorite monster movie, with an added dose of humor and heart. Middle school dances have never been this scary or this fun!”
Kim Ventrella, author of Skeleton Tree —

Lorien Lawrence is a writer and middle school English teacher from Connecticut. When she’s not reading or writing, she can be found hunting ghosts with her family.