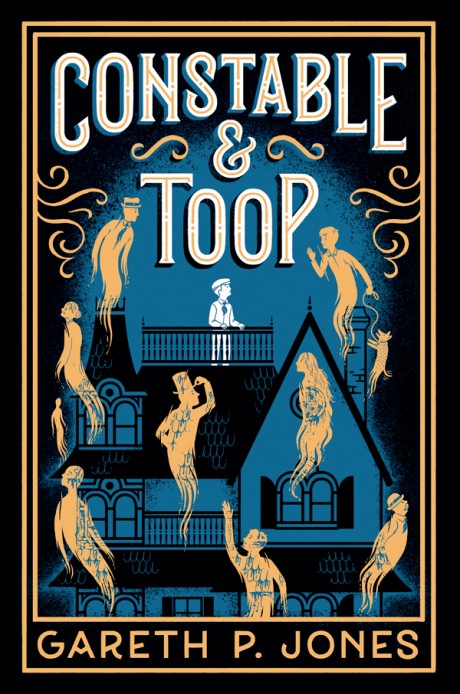 Something mysterious and terrible is happening throughout Victorian London: Ghosts are disap­pearing. When this reaches the attention of the Ghost Bureau, the diligent but clueless Mr. Lapsewood, a paranormal paper-pusher, is sent to investigate, and what he discovers is grave. The Black Rot has arrived—a voracious spiritual infestation whereby empty haunted houses suck in unsuspecting ghosts and imprison them. Lapsewood's investigation weaves through the plotlines of several other memorable characters—both living and dead—including an undertaker's son who can see ghosts, a serial throat-slasher reminiscent of Jack the Ripper, an evangelical exorcist, and many more. The living and dead must work together if they hope to destroy the Black Rot—before it destroys both the ghost and human worlds.
This highly atmospheric and bitingly funny ghost story by successful British author Gareth P. Jones will delight fans of Eva Ibbotson and Neil Gaiman.

Praise for Constable & Toop
STARRED REVIEWS
"Jones has crafted a menacing, spooky Victorian London full of criminals and unfinished business, which is well balanced by the biting satire and buffoonery of the Bureau. Add to that a cast of fascinating, well-wrought characters—from the smarmy and threatening Jack, to the precocious, pot-stirring aspiring journalist, Clara—and it's a winning combination of macabre atmosphere, whimsical antics, and heartfelt, earnest friendship."
--Booklist, starred review

"This story is sure to tickle the funny bone and satisfy the taste for some gruesome adventure while appealing to both girls and boys. A fun read that includes intrigue, murder, mystery, and a young damsel who rescues them all."
--School Library Journal, starred review

"Jones is interested in giving readers more than spooky thrills; his characters have moral heft and are concerned with issues such as culpability, whether people can be considered good if they have done bad things, and the importance of living life to its fullest."
--Kirkus Reviews

"It is part mystery, part adventure, and thoroughly delightful."
--VOYA

Gareth P. Jones is the popular UK-based author of The Dragon Detective Agency series, The Considine Curse (Blue Peter Book of the Year 2012), and the Ninja Meerkats series. He is also a TV producer and plays “a slightly ludicrous number of stringed instruments.”