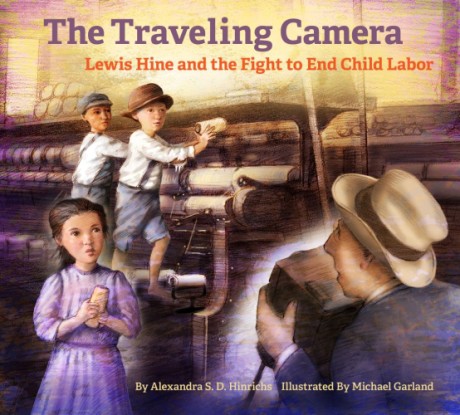 Lewis Hine and the Fight to End Child Labor

This picture book chronicles the travels of Lewis Hine, who used his camera to document child labor in the 20th century

Stunning visuals and poetic text combine to tell the inspiring story of Lewis Hine (1874–1940), a teacher and photographer who employed his art as a tool for social reform. Working for the National Child Labor Committee (NCLC), Hine traveled the country, taking pictures of children as young as five toiling under dangerous conditions in cotton mills, seafood canneries, farms, and coal mines. He often wore disguises to sneak into factories, impersonating a machinery inspector or traveling salesman. He said, “If I could tell this story in words, I wouldn't need to lug a camera.” His poignant pictures attracted national attention and were instrumental in the passage of child labor laws. The Traveling Camera includes extensive back matter with timelines, original photographs, and a bibliography.

A beautiful and heartwarming book—I give it my highest recommendation.
Kate Sampsell-Willman, author of Lewis Hine as Social Critic —

Lyrical writing combines with charming illustrations to deepen the reader’s engagement with Hine and the children he cared about. The Traveling Camera offers a way of looking at history as a confluence of art, activism, and social change.
Uma Krishnaswami, author of Book Uncle and Me and Step Up to the Plate, Maria Singh —

This book is stunning, both in words and pictures, truly a snapshot of history.
Jane Yolen, author of Owl Moon, Devil’s Arithmetic, and I Am the Storm —

Alexandra S. D. Hinrichs is the author of Thérèse Makes a Tapestry (Getty, 2018) and I Am Made of Mountains (Charlesbridge, 2022). She holds MAs in US history and in library and information studies from the University of Wisconsin-Madison. She works as a middle school librarian in Maine.
Michael Garland is a bestselling author and illustrator of many books including Ferry Boat (Holiday House, 2021), Pizza Mouse (Penguin Random House, 2017), and Birds Make Nests (Holiday House, 2018).