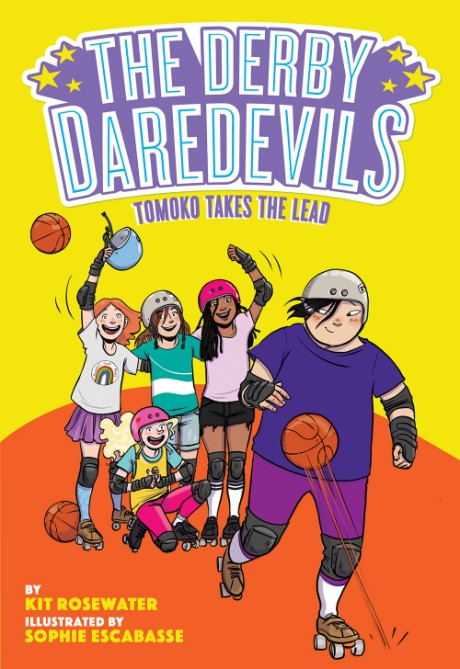 Book #3 in this highly lllustrated middle-grade series stars shy Tomoko and finds the team at roller derby sleepaway camp in nearby Dallas, Texas—now in paperback!

School’s out, and the Derby Daredevils are excited to spend all summer tearing up the track. But, the coaches have something super special planned: the Austin league is heading to Dallas for a week of roller derby sleepaway camp! Tomoko could not be more excited—she loves roller derby and her team. Plus, she’s been going camping with her uncle every summer since she can remember. She’s got all the gear and the skills she needs for two weeks in the great outdoors.

But roller derby camp isn’t in the great outdoors. It’s in the middle of the city. And it means meeting a bunch of new kids, which isn’t exactly a strength for shy, introverted Tomoko. Disappointed, she puts her head down and skates hard until the team gets lost in the middle of Dallas—without a grown-up or a cell phone to guide them back to camp. Tomoko uses her wilderness skills and navigational know-how to lead them home and her calm demeanor to keep everyone feeling safe.

"This book will roll off the shelves."
Kirkus Reviews —

"Warm, relevant, and inclusive, this title is accessible to readers who are new to the series, and a welcome addition for those who are already fans."
School Library Journal —

Kit Rosewater has a master’s degree in children’s literature from Hollins University. The Derby Daredevils was her debut. She lives in Albuquerque, New Mexico. Find her online at kitrosewater.com or @kitrosewater. Sophie Escabasse is the author-illustrator of the forthcoming graphic novel trilogy The Witches of Brooklyn. She lives in Brooklyn, New York, with her family. Find her online at esofii.com or @esofiii.