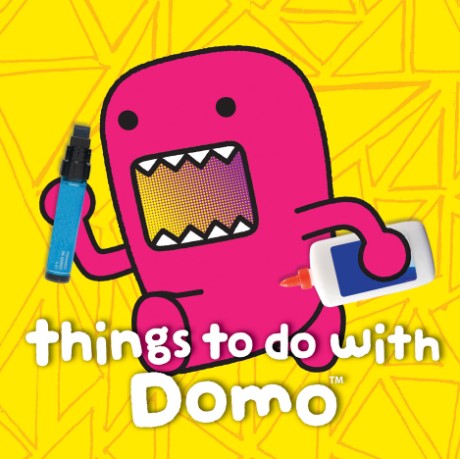 Things to Do with Domo

This fun and interactive board book features 16 colorful spreads of Domo activities perfect for every die-hard Domo fan, young or old. Users can bake a Domo cake, make a Domo bento box, make a Domo costume (for a human and for a dog!), make a Domo Cubee, paint Domo on their fingernails, apply temporary tattoos, and Domo-ize T-shirts, tote bags, skateboards, and more! Extras are packaged in a resealable envelope at the back of the book. Extras include Domo-themed temporary tattoos, a Domo Cubee, and a Domo stencil sheet.
Domo is the funny, square-ish, brown creature that began life as a mascot for a Japanese TV network, but who has blown up into a beloved international phenomenon. His fuzzy, grinning mug has appeared everywhere from plush toys to figurines, T-shirts to key chains, as well as on more than one million fan sites and on his official Facebook page, where he has made over 230,000 friends. But Domo has never had his own activity book . . . until now.