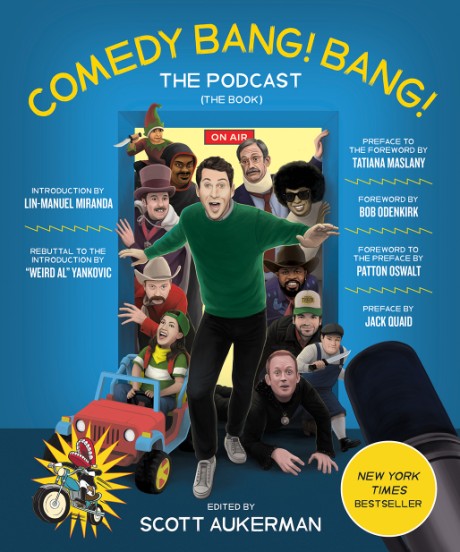 From Scott Aukerman and the comedic geniuses who created the Comedy Bang! Bang! podcast comes a book that brings the chaotic, hilarious, and outrageous characters of the pod to the page

In Comedy Bang! Bang!: The Podcast: The Book, Scott Aukerman transports readers inside the zany world of the Comedy Bang! Bang! podcast. The book features brand-new anecdotes and opinions from the show’s wild cast of recurring characters, and matches the show in tone and wackiness, with essays, lists, plays, nods to running bits, and four-color illustrations throughout, helping to bring the zany, satirical, undefinable world of Comedy Bang! Bang! to life in new and surprising ways!

“Impressive . . . Aukerman and his gang of high-powered friends and contributors can tell a funny story. Devotees will love the origin stories and comedy bits from the series’ beloved characters, and the collection’s creative structure may land the show some new fans as well.”
Kirkus Reviews —

Scott Aukerman is the host of Comedy Bang! Bang!, which celebrates its 14th anniversary this year. He is the co-creator and director of the web series Between Two Ferns with Zach Galifianakis, which was expanded into a feature film for Netflix. Aukerman created, hosted, wrote, and produced the parody talk show Comedy Bang! Bang!, which aired on IFC for five seasons. He began his career as a writer and performer on the HBO sketch comedy Mr. Show with Bob and David.