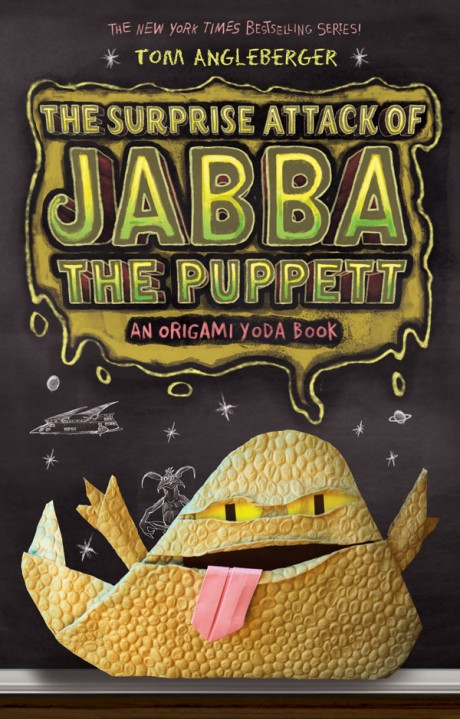 The Surprise Attack of Jabba the Puppett (Origami Yoda #4)

Some problems are too big for Origami Yoda alone . . .

This semester, Dwight, Tommy, Sara, and the gang must face their deadliest enemy yet: The FunTime Education System. Meant to raise standardized test scores, the mind-numbing videos of Professor FunTime and his singing calculator are driving everybody crazy! And worse yet, to make time for FunTime, all electives—drama, art, band—have been canceled!

Naturally, the kids turn to Origami Yoda for help, but he tells them that this enemy is too strong for him to fight alone. If they want to get their favorite classes back, they must form a Rebel Alliance. Soon dozens of kids, each with his or her own origami puppet, join the Alliance. But will the Force be with them—or will they be defeated by the FunTime Menace?

"Fans of the series will relish the side drawings' goofy humor, the new puppets to make, and the cliff-hanger promising more to come."
School Library Journal —

"Angleberger delivers another clever, funny crowd-pleaser. The message isn't bad either: uniting for the greater good and standing up for one's beliefs. Fans of the series, or of Star Wars, will hit warp speeds to grab a copy of this one."
Booklist —

Tom Angleberger is the bestselling author of the Origami Yoda series. He is also the author of Horton Halfpott and Fake Mustache. Tom maintains the Origami Yoda–inspired blog origamiyoda.wordpress.com. He is married to author-illustrator Cece Bell and lives in Christiansburg, Virginia.