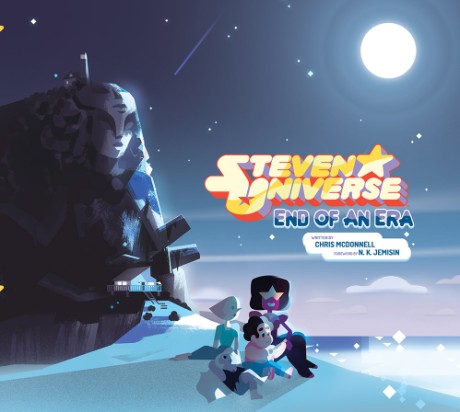 Steven Universe: End of an Era

The official sequel to the bestselling Steven Universe: Art & Origins

Steven Universe: End of an Era is the eagerly anticipated follow-up to the bestselling behind-the-scenes companion book Steven Universe: Art & Origins. Showcasing new concept art, storyboards, background paintings, and exclusive interviews, End of an Era will update the history of the Emmy Award–winning series to cover season four through to the critically acclaimed finale, “Change Your Mind,” and beyond.

Fans can expect a special focus on creator and showrunner Rebecca Sugar’s elaborate process for creating the lore for the series, as she and the crew reveal how they discovered and developed the complete story arc for each character, as well as how they were able to design a show that so refreshingly captures and celebrates the experience of childhood. Steven Universe: End of an Era is a heartfelt send-off to one of the most progressive, imaginative, and beloved animated series of our time.

“...this book extends the life of this treasured animated series.”
Variety Magazine —

Chris McDonnell has served as author and designer for Adventure Time: The Art of Ooo, Steven Universe: Art & Origins, and BoJack Horseman: The Art Before the Horse. He lives in Philadelphia, Pennsylvania.