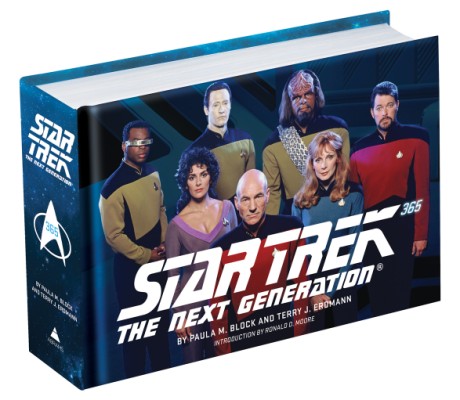 Star Trek: The Next Generation 365

With the launch of Star Trek: The Next Generation, Gene Roddenberry somehow managed to recapture lightning in a bottle. This new incarnation of Star Trek was an instant hit, and its popularity inspired four films and three spin-off television series. To commemorate the show’s 25th anniversary, Star Trek: The Next Generation 365 provides a fresh, accessible overview of the entire series, including an authorized guide to all 178 episodes. Featuring rarely seen and now-classic photography and illustrations, this visual celebration of the voyages of Captain Picard, his crew, and the Enterprise-D offers a loving look back at the Emmy and Hugo Award–winning series.

Paula M. Block worked behind the scenes at Paramount Pictures for 19 years, and with publicist Terry J. Erdmann has written numerous books, including Star Trek: The Original Series 365 and Star Trek 101. They live in Oregon. Ronald D. Moore served as story editor and producer for Star Trek: The Next Generation, contributing scripts for 27 episodes, including the Hugo Award–winning finale, “All Good Things . . .” He lives in California.