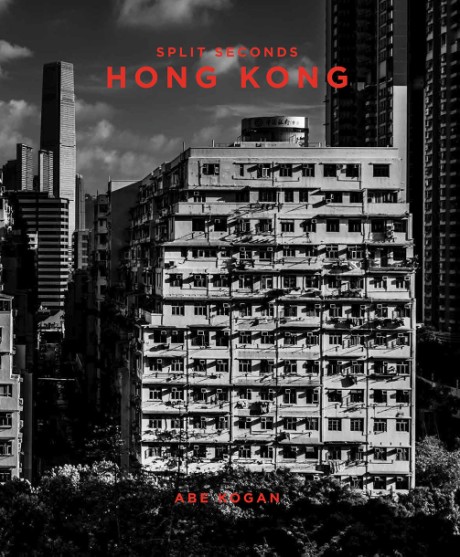 Hong Kong provides a stunning backdrop for Abe Kogan’s skillfully rendered black-and-white photography. The third in the Split Seconds series, following Havana and Florence, Hong Kong explores the city famous for its dense urbanism and high-rise marvels. The towering obelisks and repetitive facades of the modern megacity stand in stark contrast to its complex cultural roots—a city born of compromise between Chinese tradition and British influence. Kogan’s strikingly evocative images showcase this intersection of influence with intimate portraits of bustling street life, iconic skylines, claustrophobic residential areas, maritime hubs, rugged coastline, and the parks and public spaces that provide a respite from the unrelenting vigor of the city.

Abe Kogan is an international entrepreneur, as well as a writer, photographer, FIA Historic Formula One Class A champion racing driver, and film producer. His latest film, Matra Racing—The Rebirth, is now in worldwide circulation. Kogan is on a unique mission to photojournalize a sequence of countries and cities, each for their particular attributes within the nature of time and change. Paul Zimmerman is CEO of Designing Hong Kong, a nonprofit devoted to promoting sustainability. Paul is also an elected district councilor representing the Pokfulam constituency, and a board member of Civic Exchange, Professional Commons, Hong Kong Democratic Foundation, and the Patient Care Foundation. His Hong Kong Government advisory functions include contributions to the Harbourfront Commission. Paul has a Masters in Social Science from Erasmus University Rotterdam and a Masters of Arts from the University of Hong Kong. He arrived in Hong Kong in 1984 and became a Chinese citizen in 2012. Visit him at www.paulzimmerman.hk. www.designinghongkong.com.
Wendy Kwok is a prominent Hong Kong philanthropist and nonprofit executive. She is the director of Kwok Scholars Association, which promotes and advances education in Hong Kong and mainland China, as well as chairwoman of Foodlink Foundation and a council member of the Hong Kong Information Technology Joint Council. Her late husband, Walter Kwok, was the former chairman of Sun Hung Kai Properties, one of the largest property companies in Hong Kong. In 2011, they founded the Walter Kwok Foundation, which provides support for education, social causes, environmental efforts, and the arts.