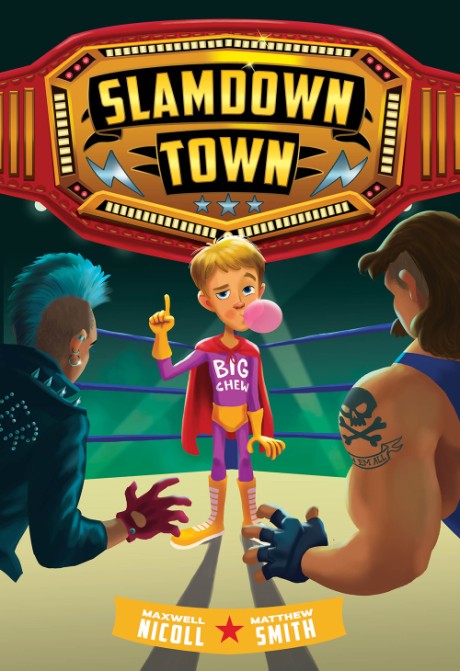 By Maxwell Nicoll, and Matthew Smith

Ollie and his older brother, Hollis, have wrestling in their blood: Their mom was a pro whose dreams of stardom were dashed by a devious opponent. Now she’s an overworked, underpaid ref at Slamdown Town, the local arena. Ollie’s goal in life is to win the golden championship belt for his mom—immediately followed by his other goal: to hang his bully of a brother from the roof by his tightie-whities. But there’s one problem: Ollie inherited their estranged dad’s puny frame, while Hollis got their mom’s brawn. Thus Ollie has resigned himself to a fate of wrestling mediocrity and wet willies . . . until the day Hollis gifts him a piece of stale gum and forces him to chew it. Ollie soon discovers that the gum—bought on eBay and formerly chewed by a wrestling legend— has an unusual side effect: the ability to physically transform Ollie into a pro wrestler. As Big Chew, Ollie’s finally able to put Hollis in his place and be a star. But when trouble befalls his family, being Big Chew gets a lot more complicated. In the end, Ollie knows he can’t have it all; and it’s only when he asks himself who he really is that he learns what it means to be a champion.

Maxwell Nicoll and Matthew Smith are writing partners, screenwriters, and graduates of The School of Visual Arts.