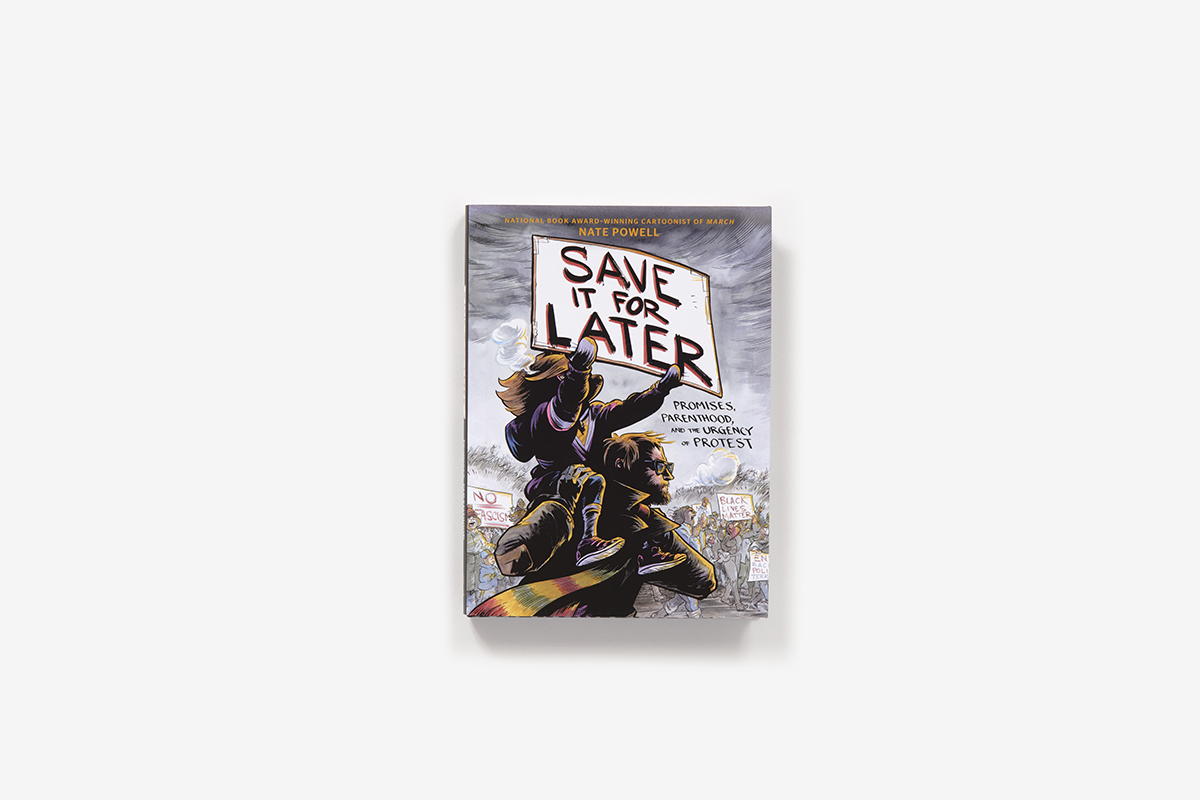 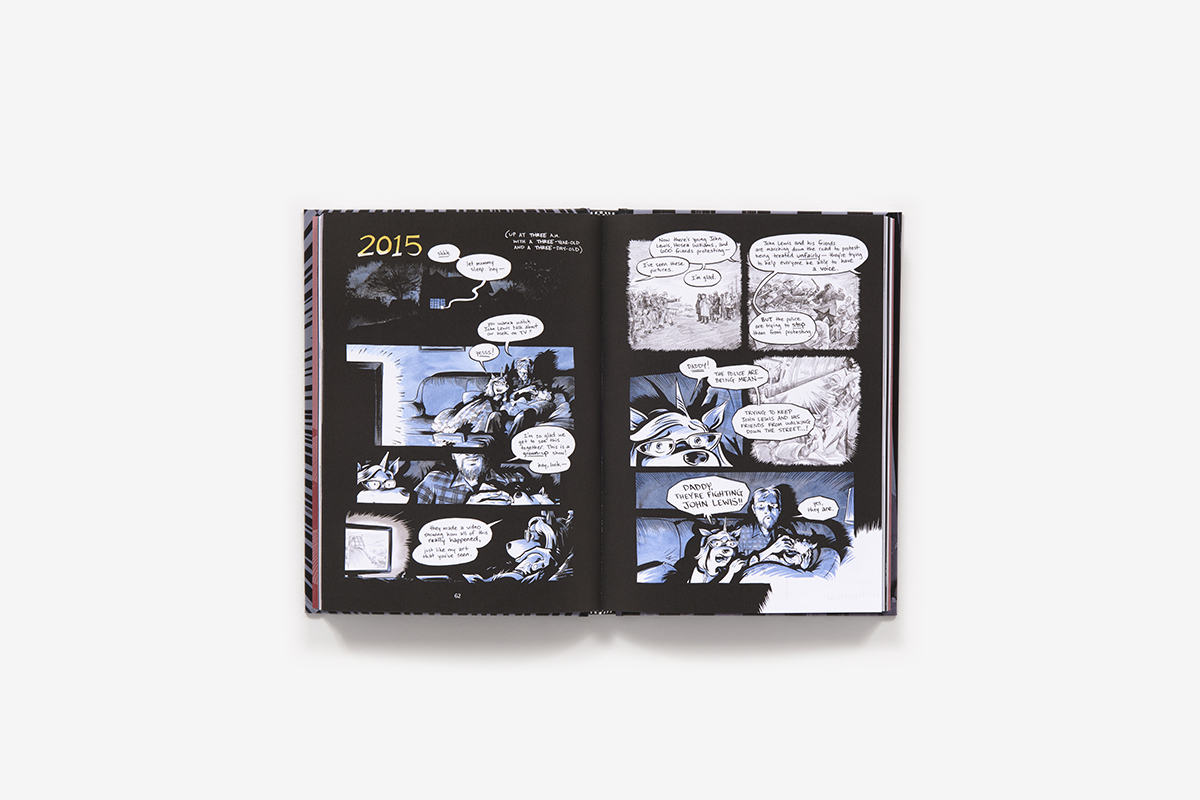 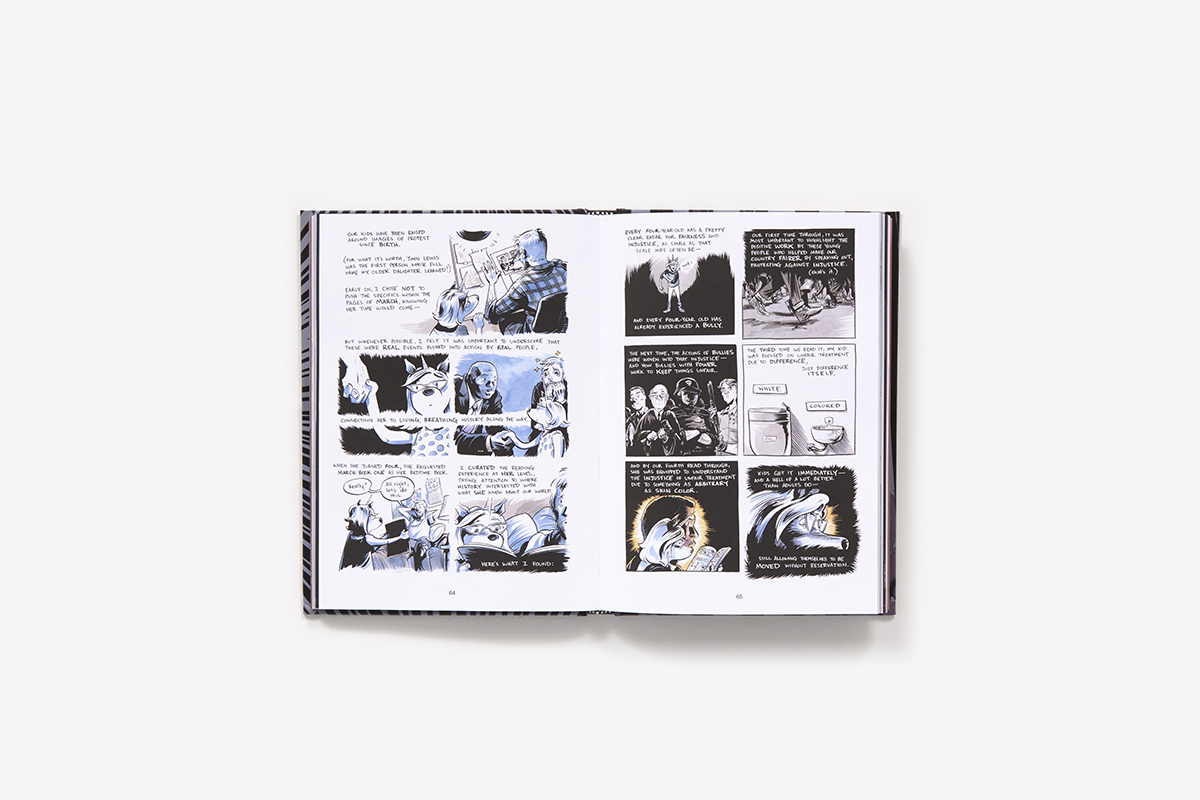 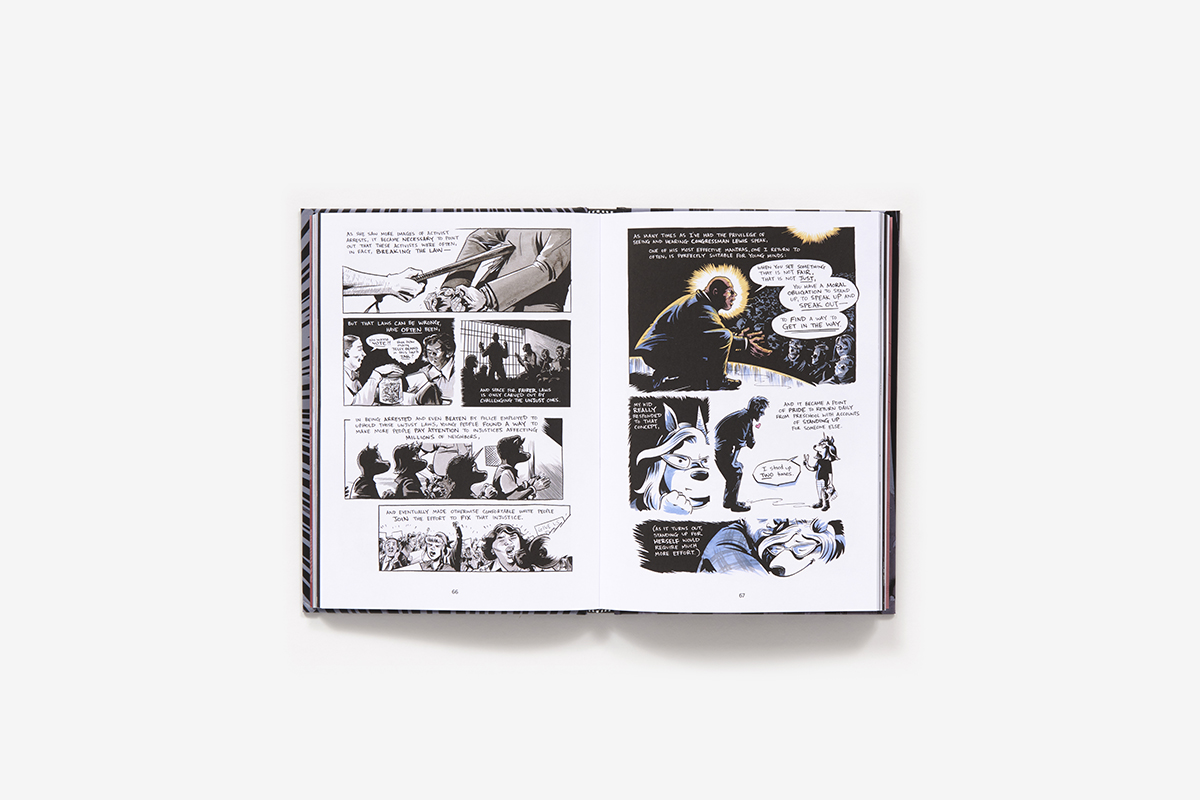 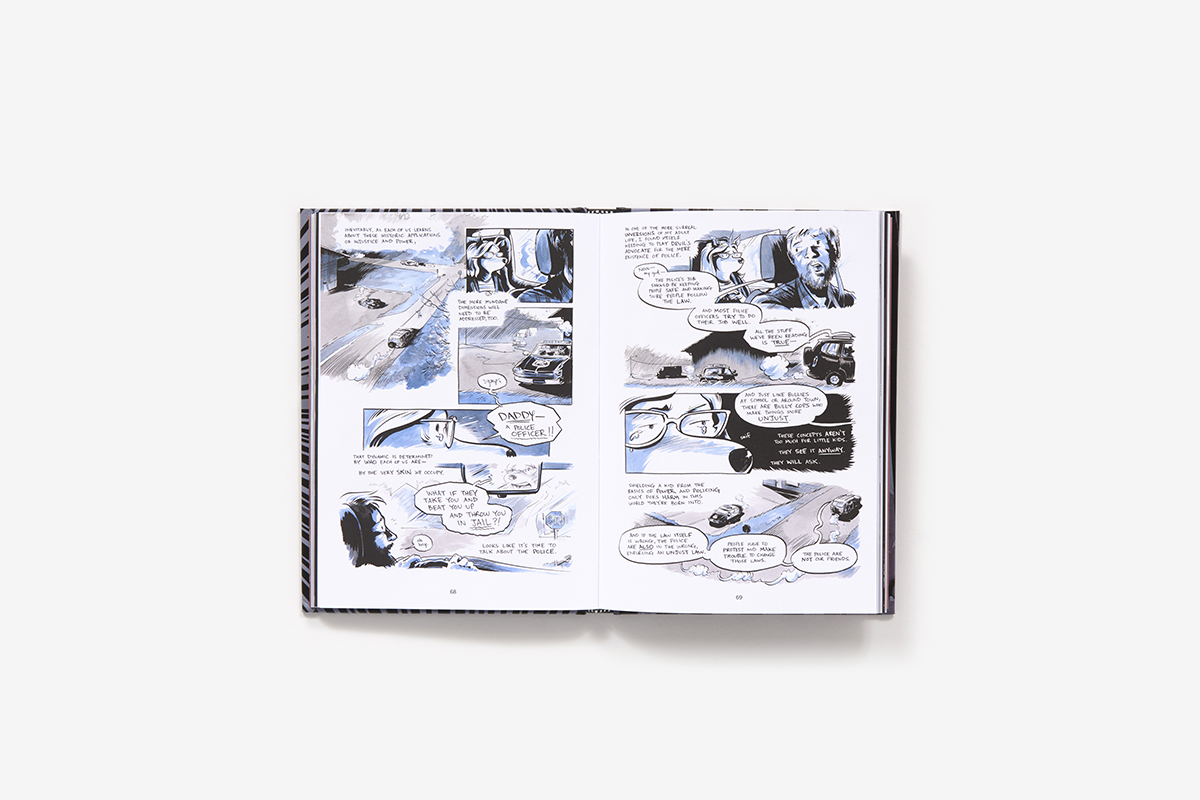 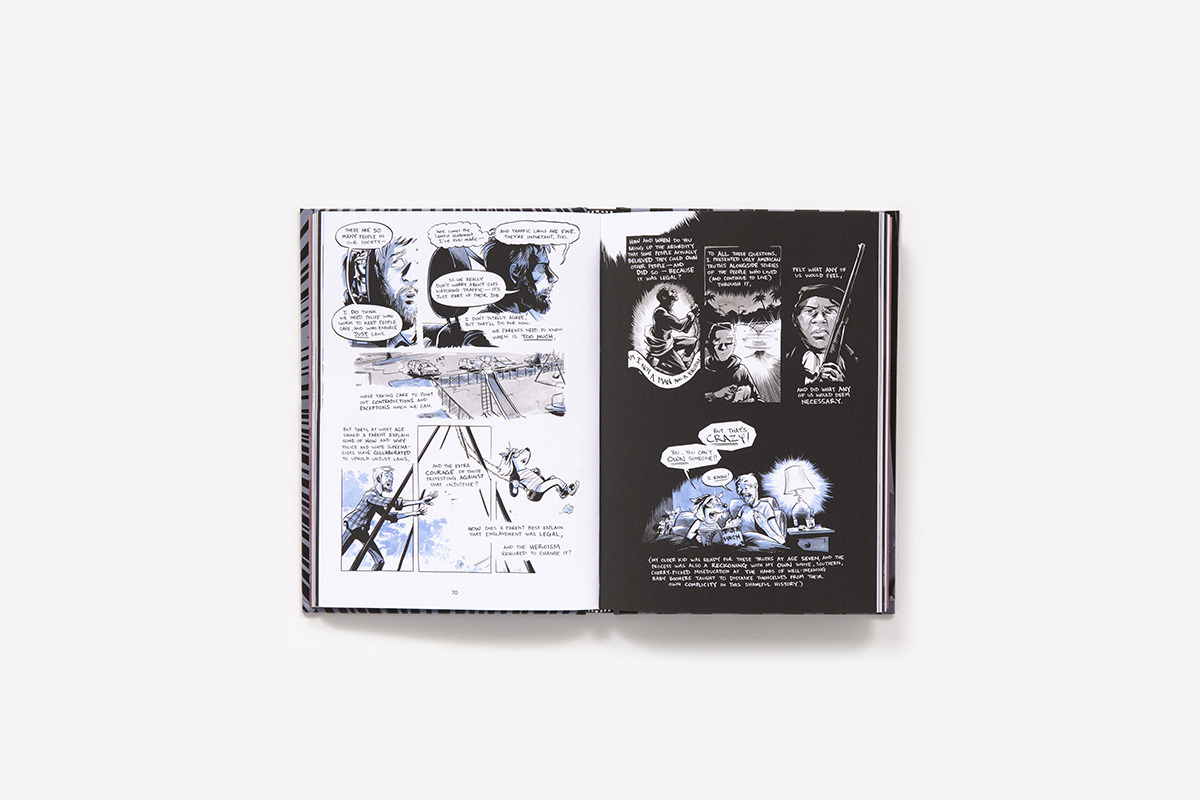 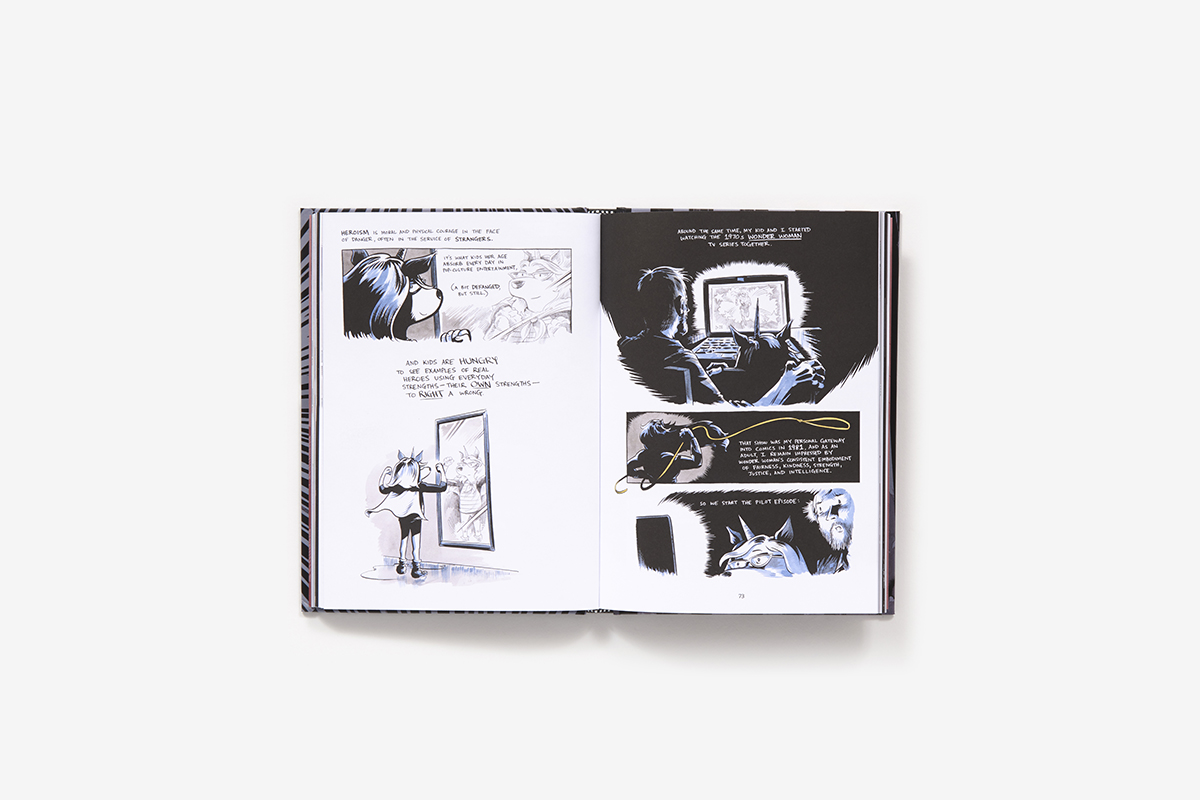 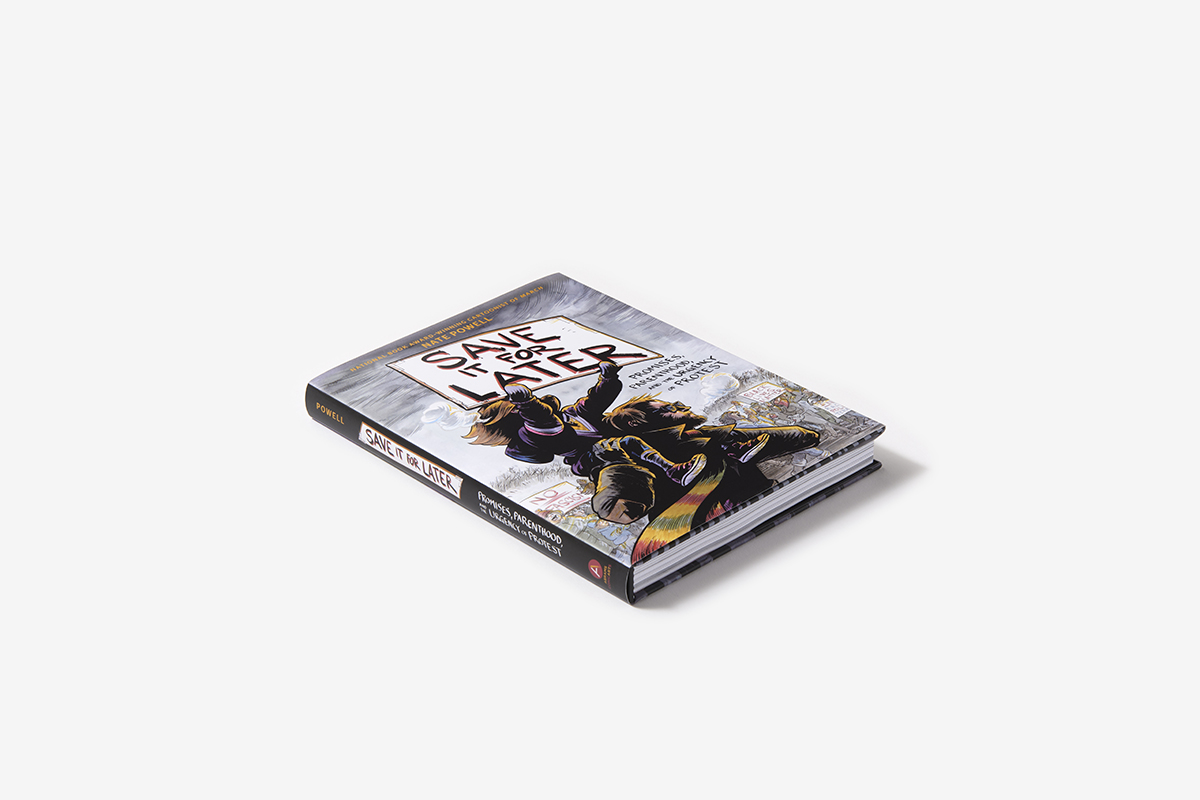 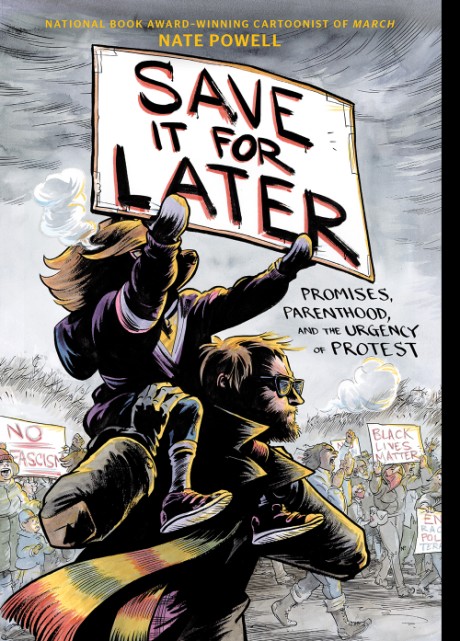 Save It for Later

Promises, Parenthood, and the Urgency of Protest

From Nate Powell, the National Book Award–winning artist of March, a collection of graphic nonfiction essays about living in a new era of necessary protest—now in paperback with sixteen pages of new material

In seven interwoven comics essays, author and illustrator Nate Powell addresses living in an era of what he calls “necessary protest.” Save It for Later: Promises, Parenthood, and the Urgency of Protest is Powell’s reflection on witnessing the collapse of discourse in real-time while illustrating the award-winning trilogy March by Congressman John Lewis and Andrew Aydin, this generation’s preeminent historical account of nonviolent revolution in the civil rights movement. Powell highlights both the danger of normalized paramilitary symbols in consumer pop culture and the roles we play individually as we interact with our communities, families, and society at large.

Each essay tracks Powell’s journey from the night of the election—promising his four-year-old daughter that Trump will never win—to the reality of the authoritarian presidency, protesting the administration’s policies, and navigating the complications of teaching his children how to raise their own voices in a world that is becoming increasingly dangerous and more and more polarized. While six of the seven essays are new, unpublished work, Powell has also included “About Face,” a comics essay first published by Popula Online that swiftly went viral and inspired him to write Save It for Later. The seventh and final essay was written after the 2020 presidential election, and examines the outcome of that contest in relation to the events of the last four years, with a particular focus on the COVID-19 pandemic and global protests in the wake of the murder of George Floyd. The updated paperback comes out just in time for the 2022 midterm elections and includes bonus content featuring a conversation between Powell and Derf Backderf, the New York Times–bestselling author of My Friend Dahmer and Kent State, where they discuss the militarization of civilian spaces and the aftermath of the January 6th insurrection.

As Powell moves between subjective and objective experiences raising his children—depicted in their childhood innocence as imaginary anthropomorphic animals—he reveals the electrifying sense of trust and connection with neighbors and strangers in protest. He also explores how to equip young people with tools to best make their own noise as they grow up and help shape the direction and future of this country.

“...much of this work feels like visual poetry…A virtuoso work of artistry with important content that might alienate some but powerfully stir others.”
Booklist STARRED Review —

“[Powell] asks readers not to forget, not to look away, but to remember what we can achieve when we come together. Save it for Later argues for solidarity in family, community, and across the nation now and for the future.”

“Save It For Later explores the space where political life intersects with the personal.”
The Beat —

“Save it for Later confronts this political era.”
The Arkansas Times Magazine —

“This is a gorgeously drawn, well articulated and powerful new work that you should all go read as soon as you can.”
Comic Book Resources —

“While many graphic biographies and historical memoirs can feel inert, his dynamic line and talent for using the grammar of comics to shape drama and emotion, as well as action, are a standout… an absorbing reflection on intergenerational inheritance.”