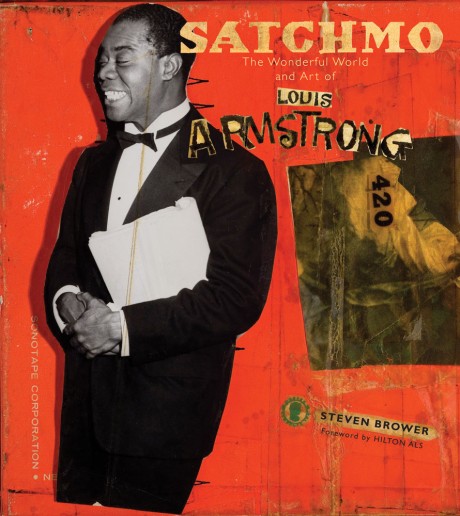 The Wonderful World and Art of Louis Armstrong

Satchmo: The Wonderful World and Art of Louis Armstrong is a biography in the form of an art book. It tells the story of Armstrong's life through his writings, scrapbooks, and artworks, many of which have never been published before. Armstrong was the single greatest creative artist in the history of jazz and the American popular song. A true American original, he was prolific in coining colorful expressions that entered the lexicon; he wrote long, colorful prose pieces about his experiences; and he made hundreds of collages using marvelous photographs that capture archetypal scenes in the life of a jazz musician. Everything he did was an extension of his artistry.

Satchmo is a vivid trip through American jazz at mid-century, to the beat of Armstrong's own jazzy words. The book also includes photographs of Armstrong and is framed by a text that describes his significance. It will be enjoyed not only by jazz fans but also by art lovers, who will welcome Armstrong into the pantheon of American visual artists.

"The Revolution initiated by Gore Vidal with his Empire series is continued and modernized by Steven Brower in Satchmo: The Wonderful World and Art of Louis Armstrong. It is a Revolution that challenges the way in which history is told, read, and accepted...Most importantly, however, Satchmo reminds us that the book as an object is indispensable in a time when the fate of the printed book is very much debated."—Rami Shamir, Evergreen Review

"Interspersed with vivid bursts of Armstrong's own writings, what emerges is a portrait of such intimacy, it comes closest in the vast Armstrong bibliography to capturing the humble humanity and generosity of spirit of one of the great figures of the 20th century."—Stuart Nicholson, The Guardian

"Satchmo…had a way with yet another instrument: a pair of scissors. Between sets, he snipped words and images from ads and greeting cards, letters, telegraphs, and photos of friends and fans, then pasted them into jazzy, colorful collages. Satchmo: The Wonderful World and Art of Louis Armstrong collects these elegant riffs by the most artful of improvisers"—O, The Oprah magazine

"[Satchmo] perfectly complements and enhances the visual art of Louis Armstrong…a fascinating and handsome perspective on a particular aspect of the various talents with which Armstrong was blessed, one that had previously remained unexposed to the general public. … a heartfelt tribute to the creative genius of Louis Armstrong."—Joe Lang, New Jersey Jazz Society

"A beautiful book puts together hundreds of notebooks of collages never seen before by LA."—Paola Genone , L'Express

Steven Brower is a seasoned writer and designer, and creator of the award-winning book Woody Guthrie Artworks. He currently teaches design at the School of Visual Arts in New York City and Kean University in Union, New Jersey. Hilton Als is a staff writer for the New Yorker. He is the author of The Women, and was the recipient of the George Jean Nathan Award for Dramatic Criticism in 2002-03.