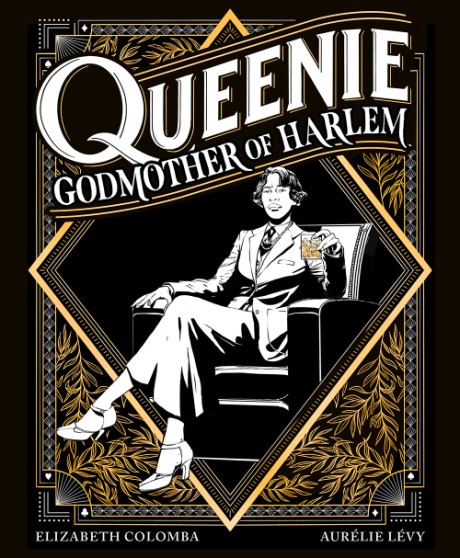 Queenie follows the life of Stephanie Saint-Clair—the infamous criminal who made herself a legend in Harlem in the 1930s. Born on a plantation in the French colony of Martinique, Saint-Clair left the island in 1912 and headed for the United States, eager to make a new life for herself. In New York she found success, rising up through poverty and battling extreme racism to become the ruthless queen of Harlem’s mafia and a fierce defender of the Black community.

A racketeer and a bootlegger, Saint-Clair dedicated her wealth and compassion to the struggling masses of Harlem, giving loans and paying debts to those around her. But with Prohibition ending, and under threat by Italian mobsters seeking to take control of her operation, she launched a merciless war to save her territory and her skin. In an America still swollen by depression and segregation, Saint-Clair understood that her image was a tool she could use to establish her power and wield as a weapon against her opponents.

Authors Elizabeth Colomba and Aurelie Levy's meticulous details—in both story and art—bring Saint-Clair’s story to life in a tense narrative, against a sometimes bloody backdrop of jazz and voodoo. The story tackles the themes of colonization, corruption, police violence, and racial identity, but above all, Queenie celebrates the genius of a woman forgotten by history.

From Martinique descent, born and raised in France, Elizabeth Colomba is a representational artist living in New York City. Her previous years as a storyboard artist for Hollywood came in handy to transition from figurative painting to imagining a graphic novel with a cinematic quality. Specialized in postcolonial art, dedicated to reinstalling and liberating the Black body from traditionally restrictive storylines, Colomba analyses the construction of identity and tangled interrelationship between past, present in our collective identity today. Her works have been exhibited in institutions such as the Met and the LACMA and are part of the permanent collection of the Studio museum in Harlem, the Park Armory Avenue, Yale, PAFA and JP Morgan.

Aurelie Levy is the co-writer of Queenie as well as a director. Born and raised in Paris, she went on to study Japanese history and film at the prestigious ICU in Tokyo. She then pursued her film and history education at UCLA in Los Angeles, where she learned the ropes of the film industry and was projected into the motley universe of actor and activist. In 2007 she directed her first documentary and subsequently collaborated with Anthony Bourdain on two episodes of his infamous program No Reservations. For the past three years, Levy has been following a group of young photographers around the world for the documentary series Off the Grid. She is based in Paris.