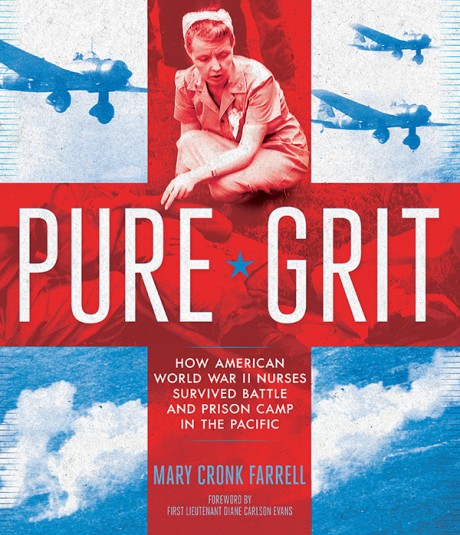 In the early 1940s, young women enlisted for peacetime duty as U.S. Army nurses. But when the Japanese attack on Pearl Harbor in 1941 blasted the United States into World War II, 101 American Army and Navy nurses serving in the Philippines were suddenly treating wounded and dying soldiers while bombs exploded all around them. The women served in jerry-rigged jungle hospitals on the Bataan Peninsula and in underground tunnels on Corregidor Island. Later, when most of them were captured by the Japanese as prisoners of war, they suffered disease and near-starvation for three years. Pure Grit is a story of sisterhood and suffering, of tragedy and betrayal, of death and life. The women cared for one another, maintained discipline, and honored their vocation to nurse anyone in need—all 101 coming home alive.
The book is illustrated with archival photographs and includes an index, glossary, and timeline.

Praise for Pure Grit
STARRED REVIEW
"Details of many nurses’ individual trials combine to form a memorable portrayal of their shared experience, one which will emotionally impact readers."
--Booklist, starred review

"Primary source materials, especially the movingly matter-of-fact recollections of several of the nurses and personal snapshots, bring the story to life."
--Kirkus Reviews

"Farrell doesn’t spare her young readers any grim details . . . She includes the challenges these women faced and the joy they felt on returning home. As awful as history can be, now might be the right time to introduce the next generation to this important period."
--The Washington Post

"In addition to photographs and helpful maps, the page layouts include facsimiles of the nurses’ letters and diaries. Young readers who enjoyed Tanya Lee Stone’s Almost Astronauts: 13 Women Who Dared to Dream will also appreciate this story of courageous women whose story was nearly forgotten."
--School Library Journal

An award-winning journalist, Mary Cronk Farrell’s books have received many accolades and a SPUR Award. She lives in Spokane, WA.