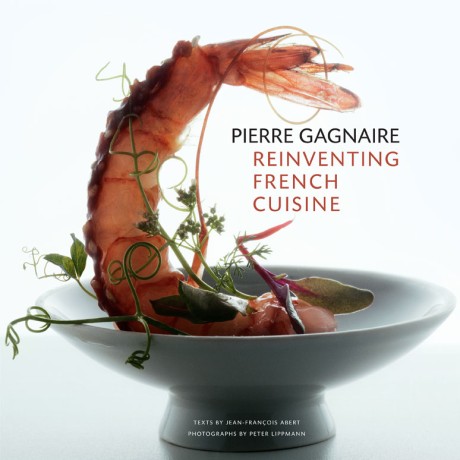 Pierre Gagnaire is considered one of the best chefs in the world, and two of his restaurants have received three Michelin stars
Chefs worldwide have been influenced by his innovative culinary approach
Includes recipes spanning the entire course of his groundbreaking career

Pierre Gagnaire is considered one of the most innovative and artistic chefs working today, renowned for his dazzling combinations of flavors, textures, and ingredients. The owner of restaurants in Paris, London, Hong Kong, and Tokyo, Gagnaire has become synonymous with adventurous and iconoclastic cooking.

Now, in Pierre Gagnaire: Reinventing French Cuisine, the legendary chef tells the story of his 40-year journey to culinary superstardom. Featuring reflections on Gagnaire's life and work, along with 40 of his favorite recipes, this is less a cookbook than an inside look at the making of a great chef.

Organized chronologically, the book begins with Gagnaire's training and follows him to his restaurants in St.-Etienne and Paris, which were both awarded three Michelin stars, and beyond. The accompanying recipes—whether a simple potatoes au gratin; an elegant combination of white cabbage, buffalo mozzarella, and caviar; or a savory potato gnocchi with saffron, artichoke, and roasted hazelnuts—are drawn from each period in Gagnaire's life, showing his early influences, the development of his vibrant signature style, and his ongoing experiments in modern French cuisine.

PIERRE GAGNAIRE was born into a family of restaurateurs and opened his first restaurant in 1980 in St.-Etienne. In 1996 he opened his third restaurant, his first in Paris, and now also owns restaurants in London, Tokyo, and Hong Kong. He is the author of Stewart, Tabori and Chang’s Pierre Gagnaire: Reflections on Culinary Artistry.

Peter Lippmann is an American-born photographer who has worked in Paris for 25 years. He publishes regularly in Vogue, the New York Times Magazine, Marie Claire, and Le Figaro.