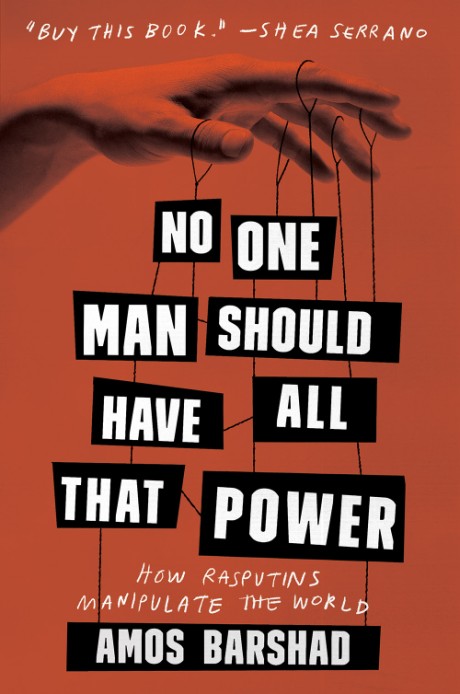 An exploration of infamous, controversial figures and how they exert control.

Amos Barshad has long been fascinated by the powerful. But not by elected officials or natural leaders—he’s interested in their scheming advisors, the dark figures who wield power in the shadows. And, as Barshad shows in No One Man Should Have All That Power, the natural habitat of these manipulators is not only political backrooms. It’s anywhere power dynamics exist—from Hollywood to drug cartels, from recording studios to the NFL.

In this wildly entertaining, wide-ranging, and insightful exploration of the phenomenon, Barshad takes readers into the lives of more than a dozen of these notorious figures, starting with Grigori Rasputin. An almost mythical Russian mystic, Rasputin drank, danced, and healed his way into a position of power behind the last of the tsars. But not every one of these figures rose to power through lechery or magical cures. Barshad explores how they got there, how they wielded control, what led to their downfall or staved it off, and what lessons we can take from them, including how to spot Rasputins in the wild.

Based on interviews with well-known personalities like Scooter Braun (Justin Bieber’s manager), Alex Guerrero (Tom Brady’s trainer), and Sam Nunberg (Trump’s former aide) and original reporting on figures like Nicaragua’s powerful first lady Rosario Murillo and the Tijuana cartel boss known as “Narcomami,” No One Man Should Have All That Poweris an eye-opening book from an exciting new voice.

“The idea of power—of influence, of control, of bending an arc toward your will—is fascinating. And Amos Barshad drops you into a discussion of it here, in both of its forms, good and bad (mostly bad), with an almost offensive ease. And being able to do that is its own form of power, really; an irony that does not appear lost on Barshad. Buy this book.”
— Shea Serrano, New York Times bestselling author of The Rap Year Book and Basketball (and Other Things)

“No One Man Should Have All That Power is not really the examination of a specific person. It’s an examination of a specific type of person, and ultimately the dissection of how a specific type of person can warp the world to his advantage, often for motives that only become clear in retrospect. This is mostly a book about shadow manipulation. But it’s also a book about how certain conspiracies are real, simply because they aren’t conspiracies at all.”
— Chuck Klosterman, New York Times bestselling author of Sex, Drugs, and Cocoa Puffs

“In No One Man Should Have All That Power, Amos Barshad encourages us to alternate between seeing the people behind the power as vulnerable human beings and as evil masterminds. You’ll never look at politicians and tastemakers the same again. Best enjoyed in small and intense pieces, this is a great snack for hungry minds.”
— Dr. Julia Shaw, author of Evil: The Science Behind Humanity's Dark Side

"Each portrait provides an incisive dissection of the acquisition and maintenance of power."
— The Nation

Amos Barshad was raised in Israel, the Netherlands, and Massachusetts. He’s a former staff writer at The FADER and Grantland and has written for The New Yorker, the New York Times, and Arkansas Times. This is his first book.