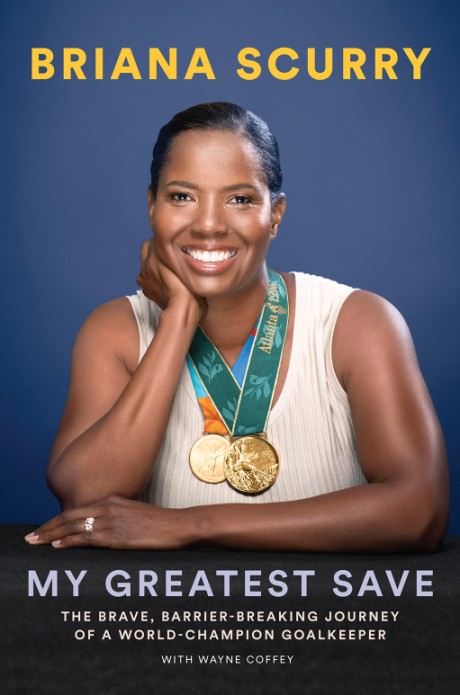 The Brave, Barrier-Breaking Journey of a World Champion Goalkeeper

By Briana Scurry and Wayne Coffey
Foreword by Robin Roberts

Briana Scurry was a pioneer on the US Women’s National Team. She won gold in Atlanta in 1996, the first time women’s soccer was ever played in the Olympics. She was a key part of the fabled “99ers,” making an epic save in the decisive penalty-kick shootout in the final. Scurry captured her second Olympic gold in 2004, cementing her status as one of the premier players in the world. She was the only Black player on the team, and she was also the first player to be openly gay. It was a singularly amazing ride, one that Scurry handled with her trademark generosity and class—qualities that made her one of the most popular players ever to wear a US jersey.

But Scurry’s storybook career ended in 2010 when a knee to the head left her with severe head trauma. She was labeled “temporarily totally disabled,” and the reality was even worse. She spiraled into depression, debt, and endured such pain that she closed out her closest friends and soccer soulmates. She pawned her gold medals. She walked to the edge of a waterfall and contemplated suicide. It seemed like the only way out until Scurry made her greatest save of all.

A memoir of startling candor, My Greatest Save is a story of triumph, tragedy, and redemption from a woman who has broken through barriers her entire life.

“My Greatest Save is more than the story of an all-time great goalkeeper. It's about a pioneering female athlete who made sure to honor those who came before her even as she worked hard to make things better for those who came after her.”
Billie Jean King —

“Before every USWNT game we played together, Briana would look me in the eye, give me a double-gloved fist bump, and ask, ‘Ready?’ I knew I didn’t have to ask her because she was always ready. Everybody knows Bri was one of the greatest keepers in the history of women’s soccer. When you read My Greatest Save, you will find out that her heart and courage were every bit the equal of her ball-stopping skills.”
Mia Hamm —

“Briana Scurry is one of the most dominant and courageous goalkeepers I've ever played with. Her character and courage go far beyond the pitch. My Greatest Save is a moving story of resilience and triumph. It helped me get to know Bri—and myself—better.”
Abby Wambach —

“A triumphant sports memoir by one of the first African American female soccer players, an athlete who rose to fame and suffered great loss only to rise again, stronger.”
Booklist —

Briana Scurry is one of the greatest players of the US Women's National Soccer team. Her epic contributions to her sport and her country are recognized in a permanent exhibit in the Smithsonian’s National Museum of African American History and Culture. Wayne Coffey is the author or coauthor of more than 30 books, including bestsellers The Closer (with Mariano Rivera) and When Nobody Was Watching (with Carli Lloyd).