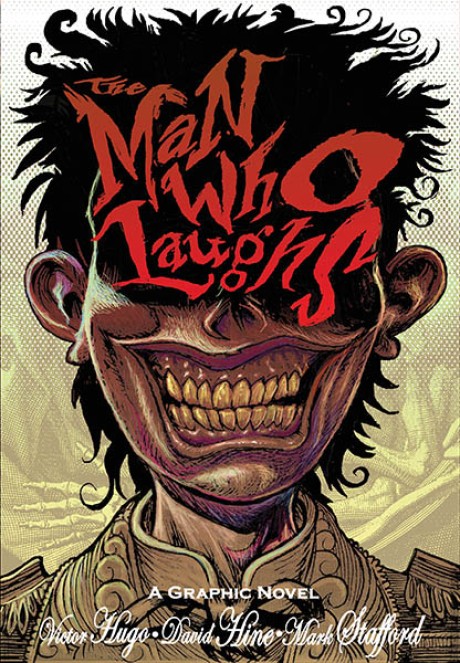 The Man Who Laughs

The Man Who Laughs (first published in 1869) is Victor Hugo’s scathing indictment of the injustice and inequality within Britain’s political system. It is the story of Gwynplaine, the two-year-old heir to a rebel lord, who is abducted upon the orders of a vindictive monarch, and whose face is mutilated into a permanent grisly grin, then abandoned. After years of living in poverty, Gwynplaine is reintroduced to the aristocratic life and resolves to become the voice of the voiceless—whether he is heard or not. Author David Hine and artist Mark Stafford introduce Hugo’s classic to a new generation of fans in this graphic-novel adaptation of abduction, mutilation, loss, and prejudice.

“Hine’s script neither shrinks from nor winks at the tale’s over-the-top melodrama, and Stafford’s elaborately cursive and pointy drawing style, awash in darkness and saturated colors, expresses it near perfectly.”
Booklist —

“Although his visage inspired Batman’s most splendiferous villain, the Joker, Gwynplaine’s commonsense polemics still resonate, whether in Occupy protests or speeches by Elizabeth Warren.”
Village Voice —

Victor Hugo (1802–1885) was one of the most prominent French writers and political figures of the 19th century. David Hine has worked in comics since the 1980s, and has written Batman for DC Comics, as well as Spider-Man and X-Men for Marvel Comics. He lives in London. Mark Stafford is a cartoonist-in-residence at the Cartoon Museum in London. He has collaborated with Costa award–winning Bryan Talbot on Cherubs! He lives in London.