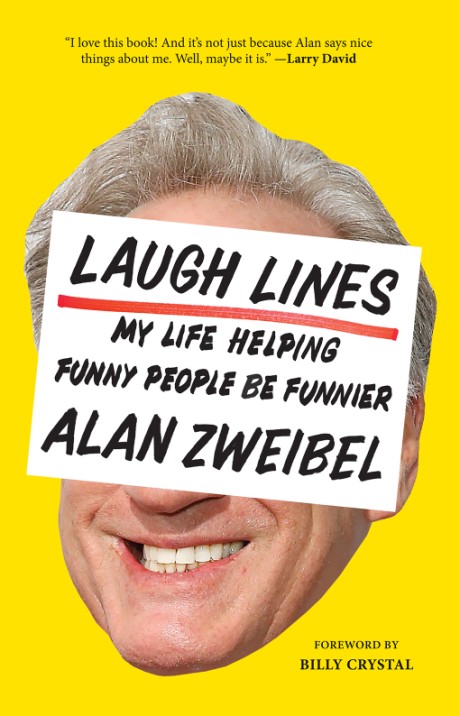 With his tender, funny memoir of four decades in the business, Alan Zweibel traces the history of American comedy

Alan Zweibel started his comedy career selling jokes for seven dollars apiece to the last of the Borscht Belt standups. Then one night, despite bombing on stage, he caught the attention of Lorne Michaels and became one of the first writers at Saturday Night Live, where he penned classic material for Gilda Radner, John Belushi, and all of the original Not Ready For Prime Time Players. From SNL, he went on to have a hand in a series of landmark shows—from It’s Garry Shandling’s Show to Curb Your Enthusiasm.

Throughout the pages of Laugh Lines Zweibel weaves together his own stories and interviews with his friends and contemporaries, including Richard Lewis, Eric Idle, Bob Saget, Mike Birbiglia, Sarah Silverman, Judd Apatow, Dave Barry, Carl Reiner, and more. The book also features a charming foreword from his friend of forty-five years Billy Crystal, with whom he co-wrote and co-produced the upcoming film Here Today that stars Crystal and Tiffany Haddish. Laugh Lines is a warmhearted cultural memoir of American comedy.

"Any comedy fan will thrill to see the contemporary art's invention through the eyes of consummate funny man Alan Zweibel. He takes you behind the velvet rope and makes you weep for all those artists who made us laugh. Screamingly funny--also very moving. A classic."
Mary Karr —

“In Laugh Lines, Zweibel looks back, affectionately and informatively, at a career that began when he was a young deli worker grinding out jokes for old-school borscht belt comedians in his spare time, and that, after his “S.N.L.” years, included rewarding collaborations with, among others, Garry Shandling, Billy Crystal, Martin Short, Larry David and Dave Barry. … Fascinating.”
New York Times —

“I interviewed Alan for my high school radio station when I was sixteen and have been hungry for comedy and life insights from him ever since! Finally, I have the Zweibel bible!”
Judd Apatow —

“Alan Zweibel will tell you everything you need to know about comedy writing. Actually, he might tell you too much, but it’s hilarious and worth it. Alan has candid and heartwarming stories about all of the greats, but in some ways, he buries the lead. He’s one of them.”
Mike Birbiglia —

“Alan Zweibel is legendary among us comedians. He is the man who delivers comedy with an emotional clout that makes him respected and revered.”
Steve Martin —

“I love this book! And it’s not just because Alan says nice things about me. Well, maybe it is.”
Larry David —

“I have read the complete works of Tolstoy, Dostoevsky, Flaubert, and Melville. Trust me, Alan Zweibel is MUCH funnier.”
Dave Barry —

“A brilliant book by a brilliant man. I can’t wait to reread it with the TV off.”
Martin Short —

“Alan Zweibel is the original man behind the man! I don’t have enough fingers to count how many people would not be where they are without Alan Zweibel. (I only have four fingers, but still . . .)”
Sarah Silverman —

"Laugh Lines reminds me of the many long, leisurely lunches I've had with Alan –– filled with laughter, great stories and humanity. He's a completely delicious original!"
Susie Essman —

“An amiable, big-lug, heart-of-gold sort of book . . . A pleasant, amusing tale of a life in jokes, suitable for budding comedians and students of the form.”
Kirkus Reviews —

“Readers will find plenty of new, behind-the-scenes details and celebrity anecdotes. This is a truly fun romp.”
Booklist —

“It’s medicine we can all use right now.”
People —

“Alan Zweibel is an architect of 20th century comedy”
Vulture —

Read an excerpt from Laugh Lines by Alan Zweibel

Alan Zweibel is an original Saturday Night Live writer who has won multiple Emmy and Writers Guild of America awards for his work in television. He also collaborated with Billy Crystal on the Tony Award–winning Broadway play 700 Sundays and won the Thurber Prize for American Humor for his novel The Other Shulman.

Billy Crystal is an American actor, voice artist, comedian, writer, producer, director and television host. He has received many awards for his work, including six Primetime Emmy Awards and a Tony Award. He gained prominence as a comedian in the 1970s and 80s in part because of his work on Saturday Night Live.